As far as we know, no pictures have survived of Edward Berry - if any were ever taken. But there are plenty of photographs that document the legendary era in which he lived and worked with a cart and horse as one of Liverpool's famous carters. And it was a trade he would pass on to his sons and grandsons for three more generations. 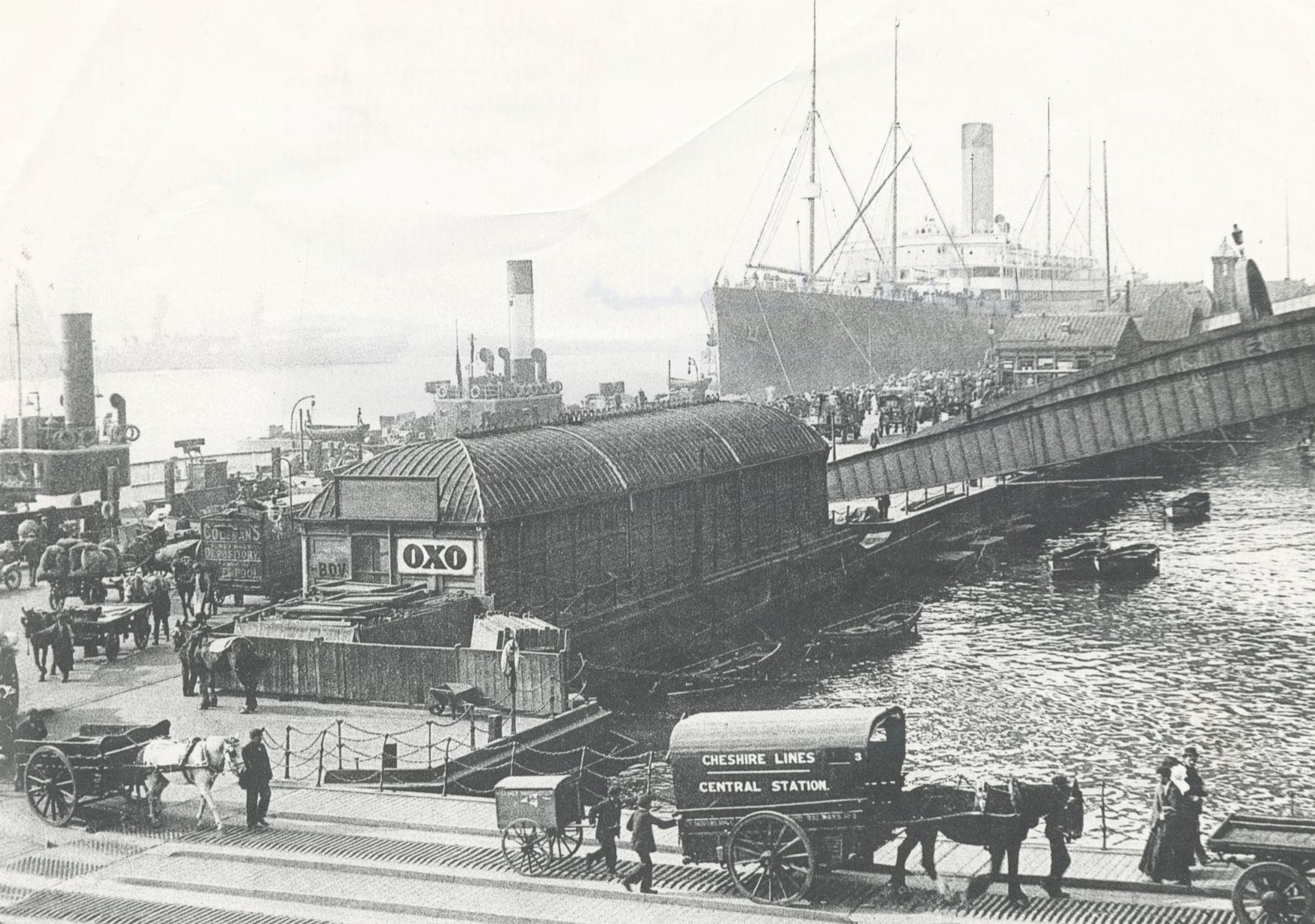 Above: A passenger liner embarks its human cargo onto Liverpool's floating landing stage in 1912 as carts ferry passengers and goods.

Below: Horse-drawn carts take emigrants bound for America from their boarding houses in Liverpool to a waiting ship, late 1800s .

EDWARD BERRY was born the son of a Liverpool laborer, at a time when the port city was booming. For the business and merchant classes, opportunities abounded. Almost every year in the second half of the 1800s, Liverpool saw some new development or innovation. In the year Edward was born, the Canning Half Tide Dock opened, expanding the port's already significant stretch of riverside docks. Two year later, the Albert Dock further extended the network.  New shipping businesses, elegant office buildings, museums, libraries and city parks would all follow before the end of the century.

And yet, before Edward was 10 years old, one quarter of the city's population was Irish as Liverpool felt the full weight of impoverished families who had fled the Great Famine of 1845-1851. Most had settled close to the dockland industries where there was generally work to be found. Many lived in squalid conditions. Edward himself would marry one of these Irish immigrants - Sidney Reed in the spring of 1870. 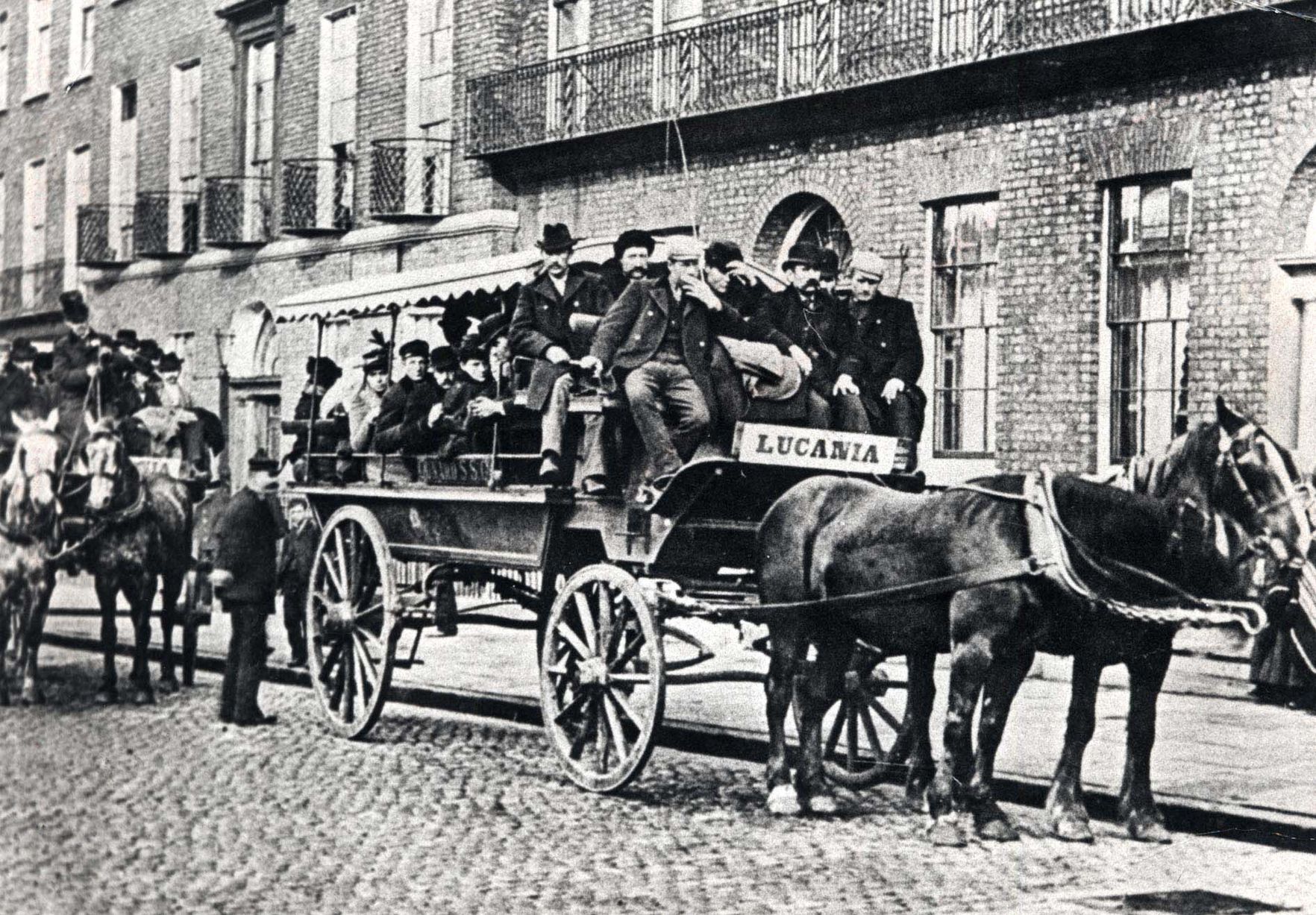 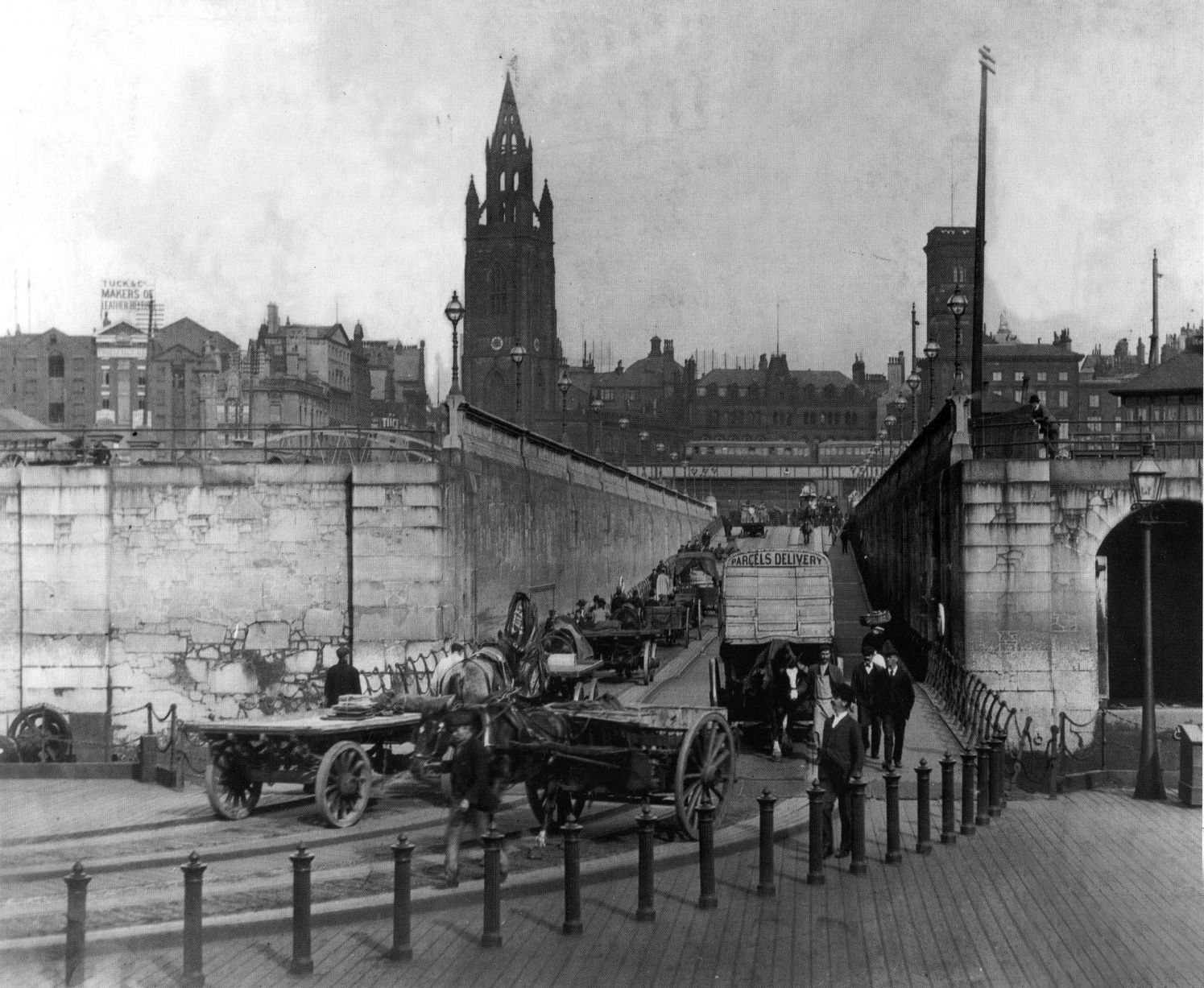 Above: Carters make their way from the docks via a floating roadway to the city's businesses and houses, passing beneath the overhead railway. Circa 1900.

It was in this environment that Liverpool's carters plied their trade, shuttling goods between the busy docks and the businesses around the city. Some carts moved people, most moved goods. Horses and carts were integral to the city's economy.  Typically, dockside and city businesses would employ runners who would seek out the nearest horse and cart for a delivery job. Sometimes it would require a team of two horses, sometimes just one. It was a busy, competitive environment, everyone looking out for work where they could get it.

It isn't possible to determine from available public records exactly when Edward began working with a horse and cart. The earliest census record on which he can be found was recorded in 1871, less than a year after he was married to his Catholic bride, Sidney Reed, in the Anglican parish church of St Alban's in Limekiln Lane, which was walking distance from Liverpool's docklands.

Both his marriage certificate and the census record of 1871 identify him as a "labourer," and he carried that description into the next census ten years later. What kind of laboring Edward did is impossible to tell with any certainty from the records, but on the 1881 census a "coal heaver" is living next door to his home in Clement Street. Perhaps Edward thought that line of work would be more suited to his needs, because by the next census in 1891 Edward was also heaving heavy bags of coal onto his shoulders for delivery.

A coal heaver lifted one-hundredweight sacks of coal from the back of a horse-drawn cart and delivered them to individual houses. The "coal man" as he was usually known to the locals, would shoulder the sack and carry it to be deposited in a coal shed next to the house. The sack would be emptied, and the empty bag taken back to the cart. It was dirty, backbreaking work. One hundredweight equals 112 pounds, or about 50 kilos. 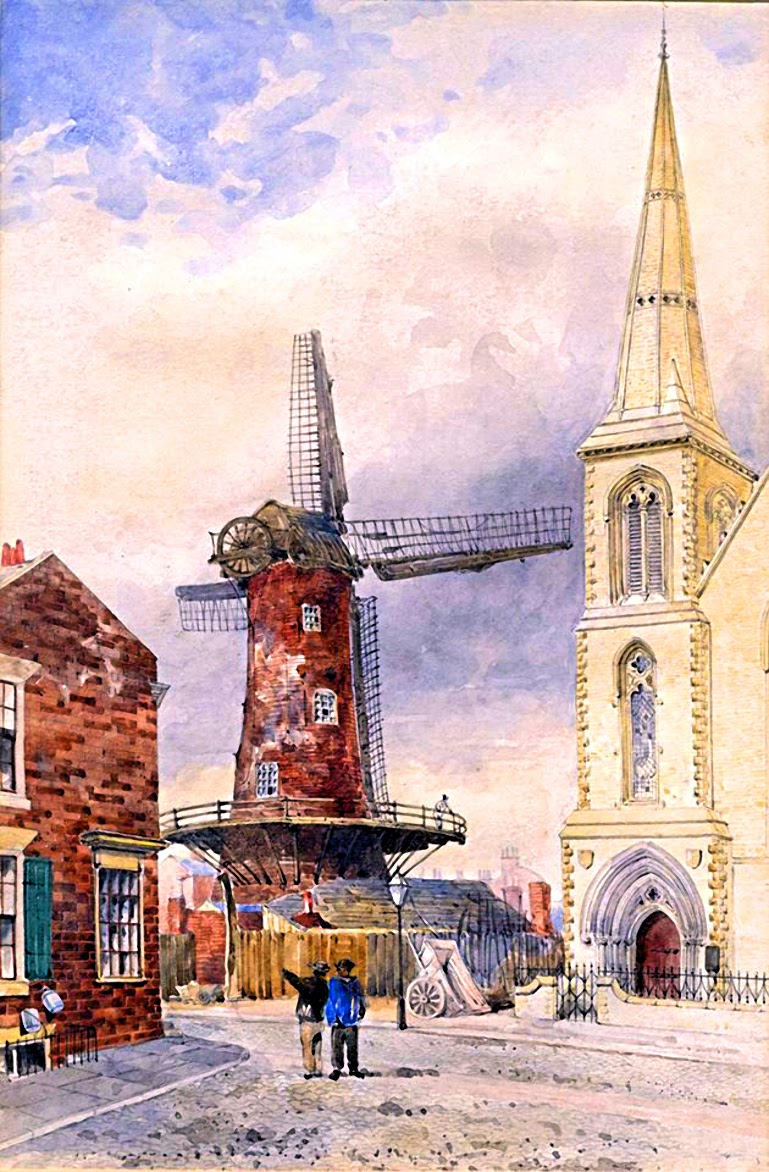 Painting by W.G. Herman in the Public domain.

Above: St. Alban's Church of England in Limekiln Lane, near Liverpool's docklands, where Edward Berry and Sidney Reed were married in 1870. The church was opened in 1846 when neighboring Catholic churches were packed to the doors with Irish immigrants. This church, pictured here in 1860 in a watercolor by William Gawin Herdman, is not to be confused with the Roman Catholic church of the same name in Athol Street, less than a mile away. The Anglican church was closed in 1941 and no longer stands. The Catholic church closed in 1991, but the building is listed and still stands.

Edward and Sidney by 1891 had two sons at home. The youngest, 11-year-old Thomas, was still at school, but Edward, the eldest and aged 19, was already a carter, probably driving a cart that someone else owned.

It had not been an easy life for Edward and Sidney.  Now in their mid-forties, they had produced five children, all boys, but three of their sons had died. Their first child, John, named after Edward's father, had lived for only six weeks before succumbing to convulsions at home. They lost Thomas, their fourth son, to pneumonia at age 17 months, and three years later six-year-old  William contracted scarlet fever and died. That left just two boys, Edward, 9, and his new baby brother, just one year old, whom they had also named Thomas.

The surviving two boys would eventually continue with their father's trade, and by the 1901 census Edward owned his own cart and was working from home, having others do the driving and delivering - namely son Thomas and Edward's brother-in-law John Reed.

Edward's trials were not over, however. His wife, Sidney died in the summer of 1904 at age 64* after battling bronchial pneumonia for five days. Youngest son Thomas, now himself a father of five, died of tuberculosis in 1910 at only 30 years of age.  All of this is a reminder that even around the turn of the 19th century and beyond, killer diseases like TB, pneumonia, scarlet fever, diphtheria and polio could strike at families without discrimination.

Of the five sons of Edward and Sidney, only Edward Joseph would outlive his parents. That one son, however, would have 15 children and leave an enormous posterity. 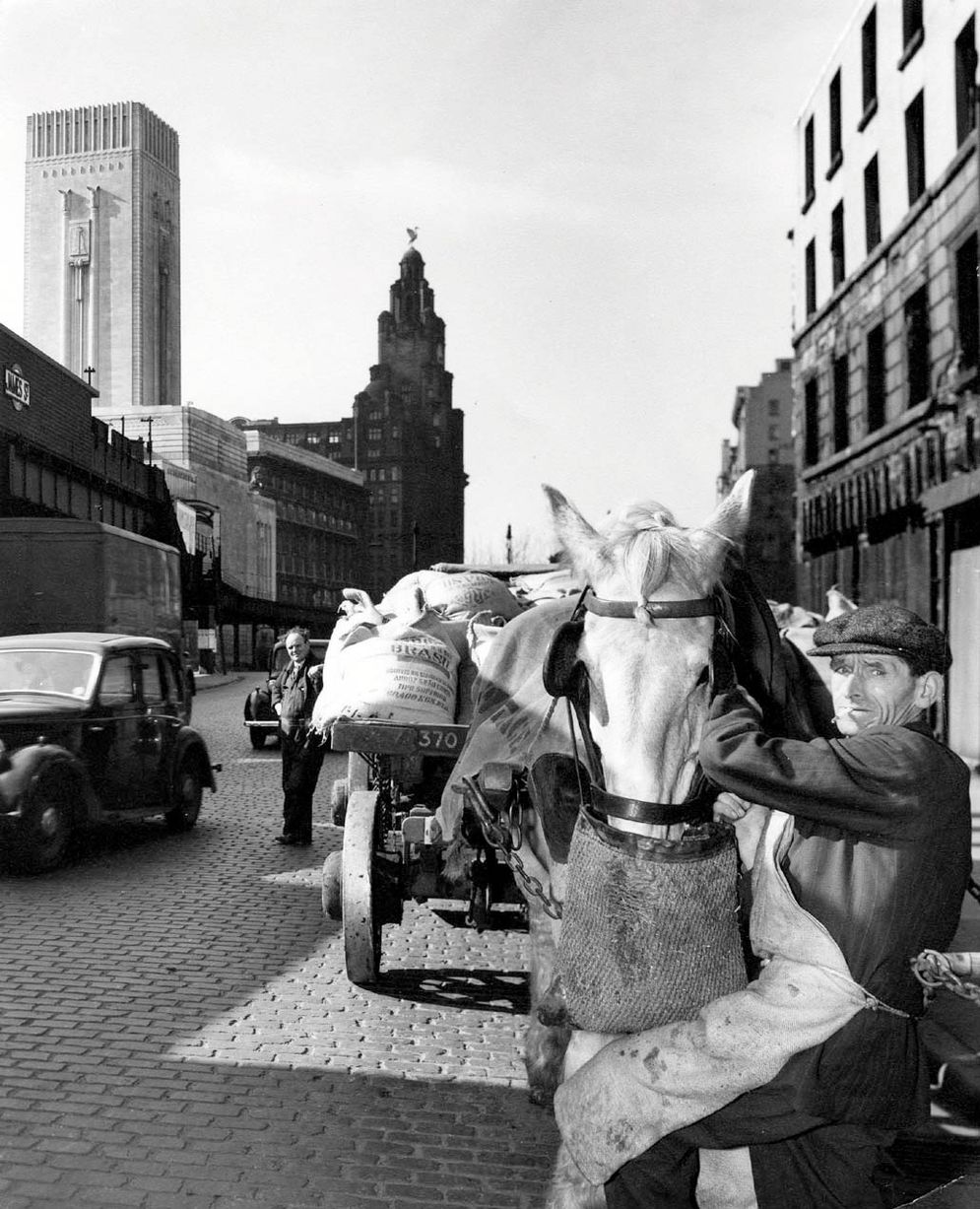 Above: A Liverpool carter feeds his horse. The cobbled street, the cars and the soot-stained Liver Building in the background date the picture to around late 1950s.