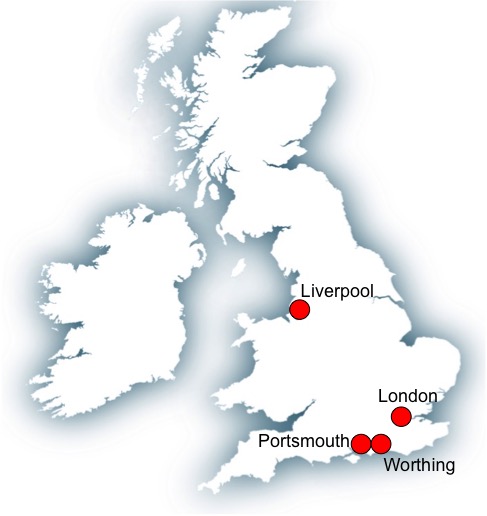 Above right: Parish church of St. Mary's Walton-on-the-Hill, Liverpool, where Frederick was christened in 1863.
Right: Parish church of St. Mary, Broadwater, near Worthing, Sussex, where Frederick and Emma Giles were married in 1887.
Below:  Frederick and Emma Giles' world for ten years was the Northwest Frontier of India. British bases were located at Rawal Pindi, Murree Hills and Jutogh.
Maps and photographs of the military enclave at Jutogh, near Simla, give a sense of the environment where two of their four children were born.
Bottom: Sunset over the rugged mountains at Murree Hills.

When Frederick Wright Giles left the British Army after 26 years, he had a career behind him that had taken him to three continents, called on him to fight in several major campaigns, and earned him a mention in dispatches for his part in the battle for Tugela Heights in the Second Boer War in South Africa. He even re-enlisted in the Army to fight in World War I. 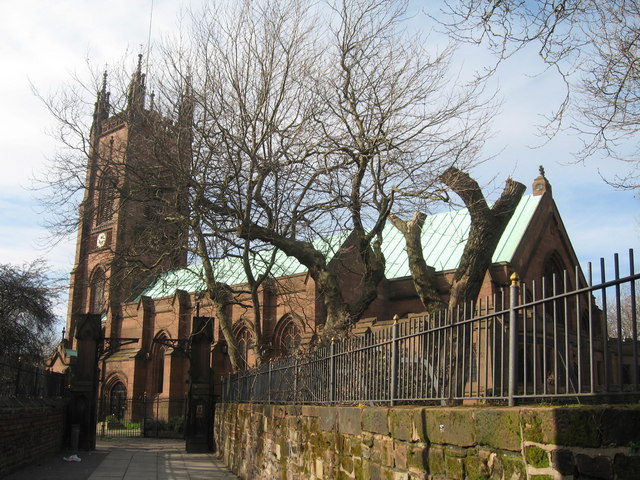 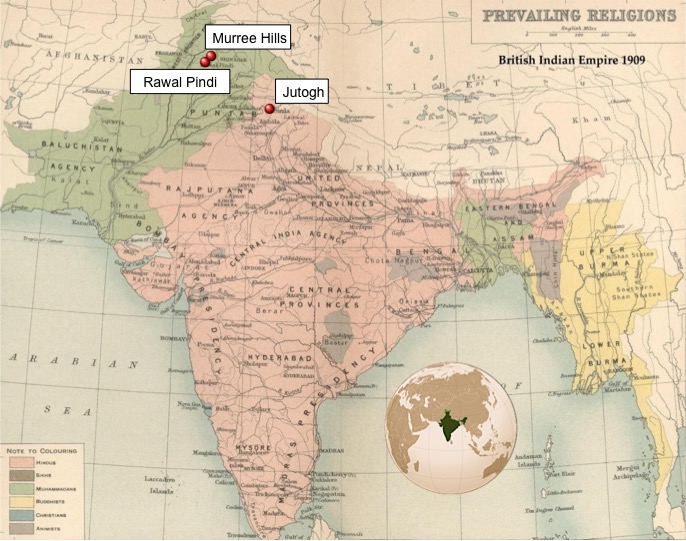 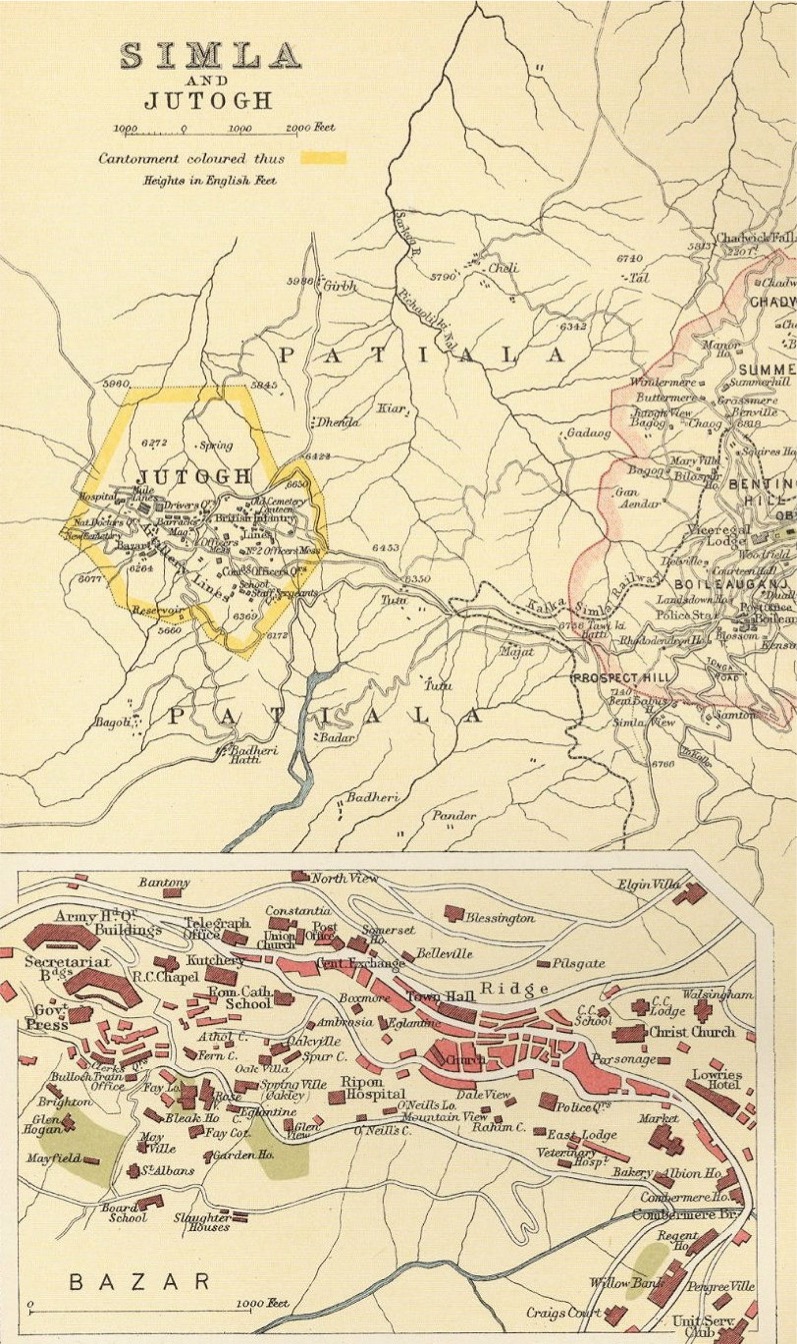 Extracted from: Constable's 1893 Hand Atlas to India and Murray's 1924 Handbook, on Rootsweb.com 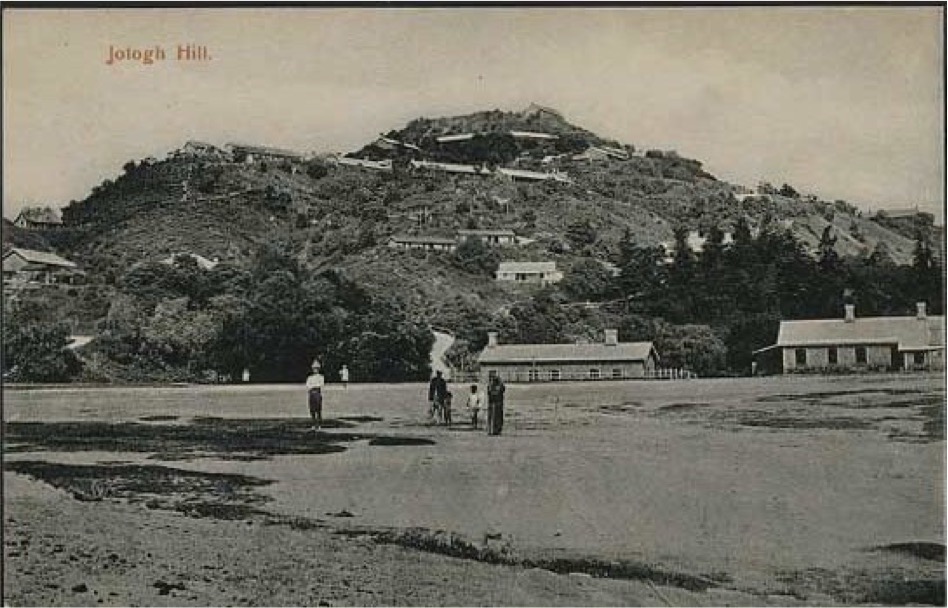 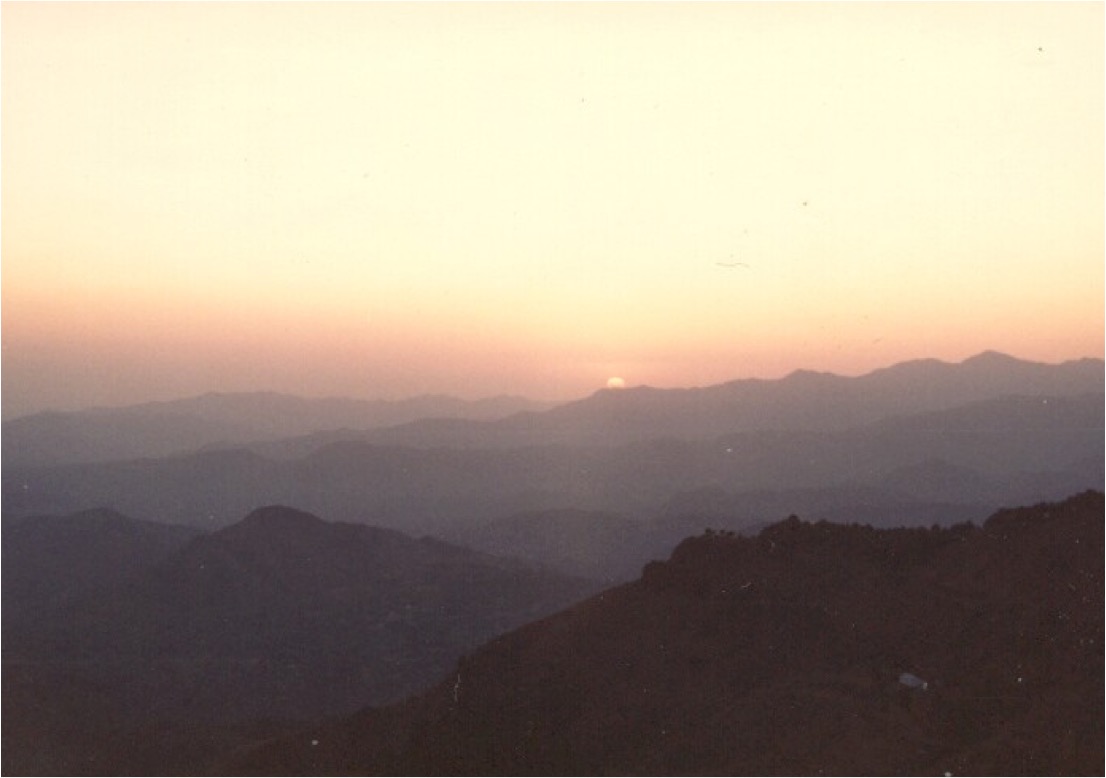 Released into the public domain by its author.

FREDERICK WRIGHT GILES gave up his job as a barman at a pub in Pembroke Place, Abercrombie (an inner suburb of Liverpool, the city where he was born) at the age of 18 and joined the army as his father had done. He enlisted in the Royal Artillery at Portsmouth on 14 January 1882.

Standing at just over 5 ft. 8 in. and weighing only 134 pounds, he was a slight figure, with dark brown hair and brown eyes and a missing front tooth. Twenty-six years later when he left the armed services, he was technically a clerk. But he had a career behind him that had taken him to three continents, called on him to fight in several major campaigns, and earned him a mention in dispatches for his part in the battle for Tugela Heights in the Second Boer War in South Africa. He even re-enlisted in the Army to fight in World War I.

His longest posting was to India, where he spent a total of ten years in the far north and at the troublesome Northwest Frontier. Although he met his wife in Sussex, all four of his children were born in India, then the jewel in the crown of the British Empire.

A look at the above map of the religious affiliations of India at the end of the 1800s and early 1900s makes it easy to see how it fractured along Hindu-Muslim lines in the mid-20th century when Muslim territory (shown in green) eventually became Pakistan.  But it was still India when Frederick and his wife, Emma, left England in late September, 1887, just over a month after they were married at the ancient parish church at Broadwater, in the village of East Preston, near Worthing, Sussex. They were bound for the British military barracks at Jutogh, in the ruggedly beautiful but forbidding far north of the country, on the edge of the town of Simla in the Punjab, nestled against the southern edge of the Himalayas. Today, Simla is in the Indian state of Hamachal Pradesh.

The Giles’ first child arrived on 8 May 1888, about eight months after they left England. They  named her Emfred - a contraction of the first names of parents Emma and Frederick. India had no civil registration at that time, and confirmation of the birth of each of the four known Giles children comes from Army records such as the Army Ecclesiastical Returns and Regimental Birth Indices that are part of the General Registrar’s Office. Some 23 pages of military records are viewable on Ancestry.com, spanning his entire career.

Valuable though they are, the records can give only glimpses into how Frederick and Emma spent those ten years in India. She was a shoemaker’s daughter from Worthing, Sussex. Elder brother, William, was a Baptist minister. She may have had a better-than-average education, but we can only speculate as to how she passed her time. Jutogh was one of the first military cantonments built in the British period. There were no large cities in proximity. Simla, to which Jutogh was nominally attached, had only about 12,000 people. Significant construction work was taking place, including the building of drainage and sewerage systems and the provision of better water supplies and other public works. The town was served by a railway line, and even had its own distillery for the production of whiskey from barley malt. The preponderance of British place names in Simla was typical of the colonial era.

Not far from Rawal Pindi but at 7,500 feet, the area known as Murree Hills is spectacularly beautiful. It was built by the British - cut into the southern slopes of the Western Himalayas as they rise toward Kashmir to the northeast. Houses and villas were constructed on the hillsides, and there was even a church, set rather incongruously atop a hill overlooking the bazaar. The place was started in 1851 by Sir Henry Lawrence, Governor of Punjab, both as a garrison for British troops watching the Afghan frontier and as a sanitarium. By the time Frederick Compton Giles was born there in 1896, it was regarded as a getaway or resort for British families escaping the heat. Certainly that was the attraction for the Lieutenant General of the Northern Command, who moved there from Rawal Pindi during the hot season. The Gazetteer of Rawalpindi District, 1893–94, described it this way:

“The sanatorium of Murree lies in north latitude 33 54' 30" and east longitude 73 26' 30", at an elevation of 7,517 feet (2,291 m) above sea level, and contained a standing population of 1,768 inhabitants, which was, however, enormously increased during the [May-November] season by the influx of visitors and their attendant servants, and shopkeepers. It is the most accessible hill station in the Punjab, being distant from Rawalpindi only a five hours' journey by tonga dak. Magnificent views are to be obtained in the spring and autumn of the snow crowned mountains of Kashmir; and gorgeous sunset and cloud effects seen daily during the rains [July-August]. Part of the station, especially the Kashmir end, are also well wooded and pretty.”

The “tonga dak” referred to here was a short, two-wheeled carriage somewhat like a chariot but covered, and drawn by ponies. The 38 miles from Rawal Pindi to Murree was mostly uphill and hard, slow going, despite the casual reference in the Gazetteer.

Soldiers and their families in the barracks at adjacent Jutogh were well provided for, and the contemporary map (above) shows churches, school, a hospital and a number of villas and recreational facilities as well as the usual buildings used for Army personnel and administration. The cantonment seems to have been about half a mile across, and lay mostly between 6,000 and 6,500 feet elevation - considerably more comfortable than the insufferable heat of the plains.

Some time before 1892, Frederick and Emma were transferred to Rawal Pindi (now Rawalpindi in Pakistan), where the Lieutenant General Commanding had his headquarters. It was an important station, not only for British control of the Indian Northwest Frontier, but for its strategic position relative to neighboring Afghanistan. Frederick’s posting to Rawal Pindi was consistent with the significant artillery presence there.

During this period, Frederick’s military records mention two specific engagements - the Isazai Expedition of 1892 and the relief of Chitral in 1895. The relief of Chitral is well documented. Tribesmen in the area of the far north west had assassinated the ruling chief, a nominee of the British, and a force of several thousand tribesmen sought to consolidate their point by driving out the British representative. In difficult conditions and with snow in the mountain passes, a 16,000-man British expedition was dispatched to subdue the tribesmen and relieve a small British force, which it did with some loss of life. A British garrison was later set up in Chitral, which was annexed to British India.

Now resident at Rawal Pindi, Emma gave birth to their third child, a sister to Emfred and Annie who had both been born at Jutogh. They named her Georgina. Their first son, Frederick Compton Wright, came a little more than 18 months later, and was born at Murree Hills.

Whether the Giles family lived in Murree Hills together or Emma simply stayed there for her confinement cannot be determined from the known records. Yet it must have been something of a wrench when, in mid-April 1897 and after a tour of duty of more than nine and a half years, the family finally left India for England. No doubt the parents told the children they were going home. But for the four children, India was the only home they had ever known.

The Posting to Crete and Malta

Frederick Giles’ posting to Crete was fairly brief - his military record shows 90 days from 27 August 1997 to 24 November of the same year, meaning that he arrived after the initial occupation and left before the decisive events of 1898. It is almost certain he served in and around the city of Iraklion, since that sector was assigned to the British.

It is also likely the Emma and the children were in England during this time, since he had been posted home for 143 days after returning from India. After his three months in Crete, Frederick was transferred to the large British base at Malta.

The Occupation of Crete

With the approach of the end of the 19th century, the Ottoman Empire which had dominated the Eastern Mediterranean for centuries was in its death throes. At its height, the Muslim empire threatened Christian Europe. It embraced most of North Africa, the Middle East, Turkey and the Balkans, and extended to the gates of Vienna. But after its defeat at the Battle of Lepanto in 1571, the empire began to decline.

Frederick Wright Giles was a soldier with the Royal Artillery in the British Army which, in concert with other European powers, took possession of the island in 1897, setting it on a course for its union with Greece 15 years later. 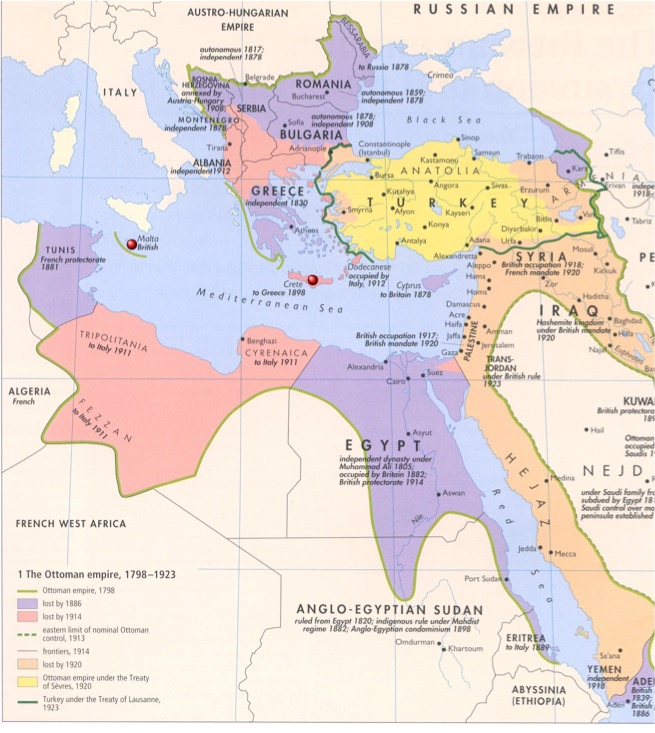 After Crete, Frederick Giles spent the next few years alternating between the British base at Malta and various stations back home in England.  The most notable next phase of his military career was engagement in the Second Boer War in South Africa, a conflict between the British Empire and the two states of the Dutch or Boer farmers who had settled the land.  It was a protracted and costly conflict, in which the Boers waged an effective guerrilla war before finally being defeated.

For his part in the Battle of Tugela Heights, aimed at relieving the besieged British-held town of Ladysmith, Frederick Giles was mentioned in dispatches and awarded a medal for "highly meritorious service." During this time his wife and children were at home in Britain - specifically, according to the 1901 census, in Wales.

By the end of the Boer War, his long army career had seen him rise from gunner to bombardier, to corporal, to sergeant, then battery sergeant major. Historically, a sergeant major rank with the Royal Artillery was one of the most senior warrant officer appointments in the British Army. 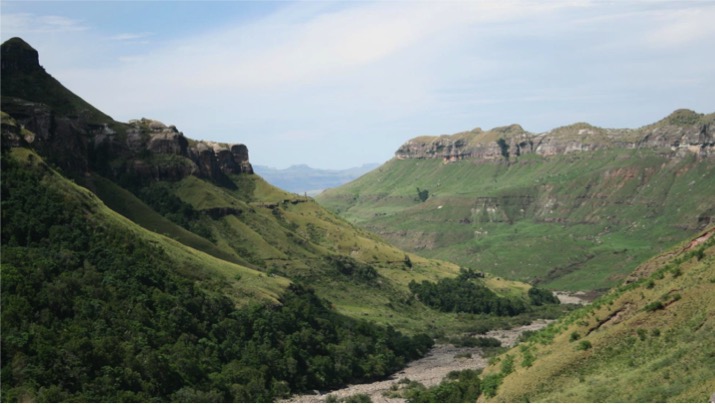 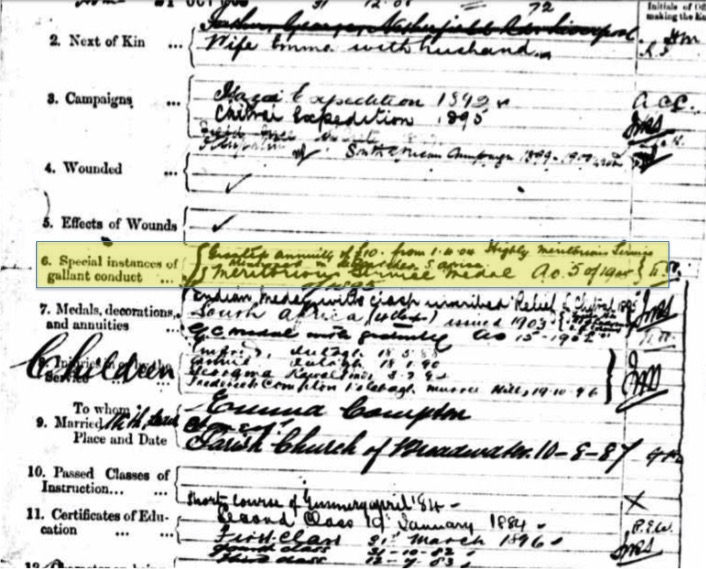 Bottom: Ladysmith town hall, Natal, South Africa. Two artillery pieces from the Second Boer War are seen right and left of the entrance. It was  for taking part in the relief of Ladysmith that Frederick Giles won his service commendations. 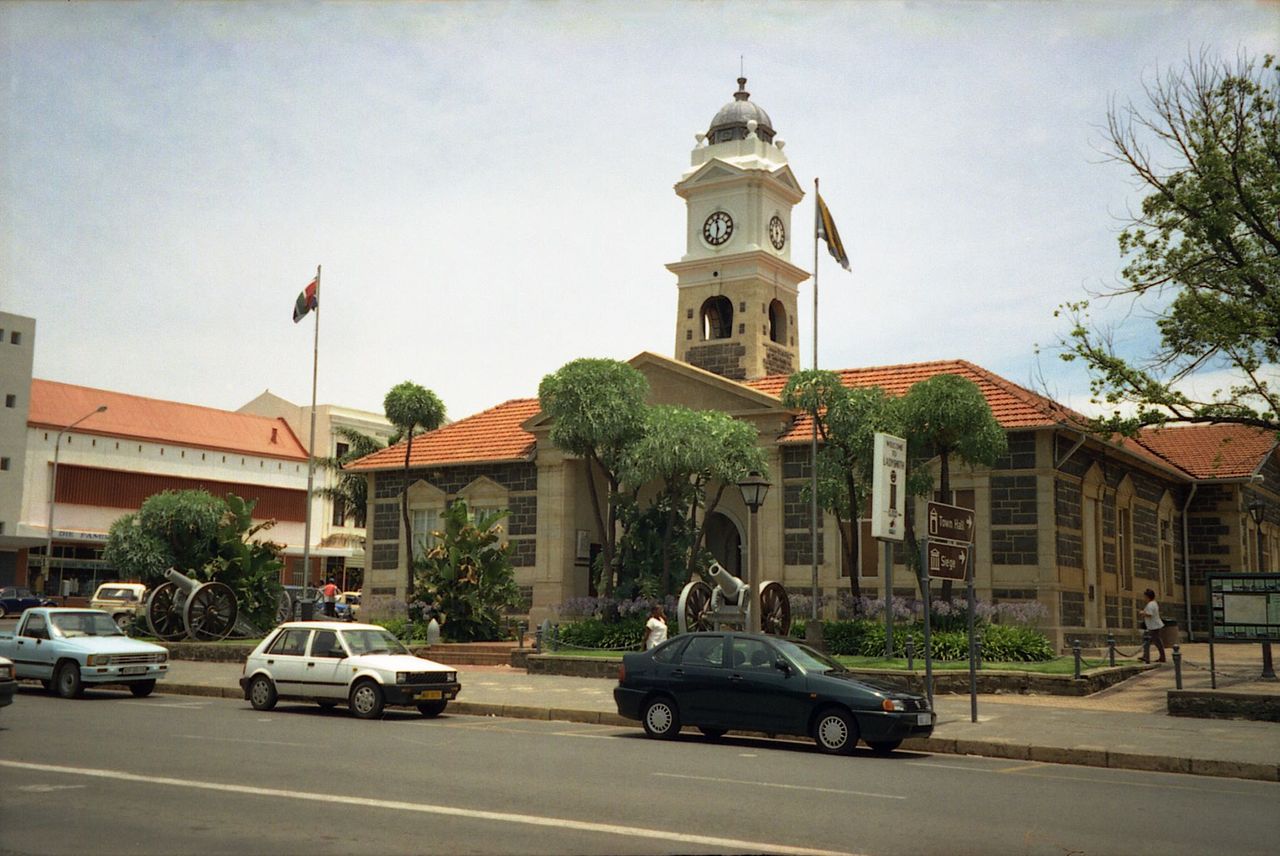