John and Elizabeth Dix had 14 children, not counting one lost before birth. Yet they were hit time and time again with tragedy, losing their babies after a few minutes, days or months of life.  Four of their first five children did not live long enough to see their first birthday. These infant deaths, which must have been agonizing for the parents, remind us of how fragile and precarious life could be for newborns even in the early 1900s. 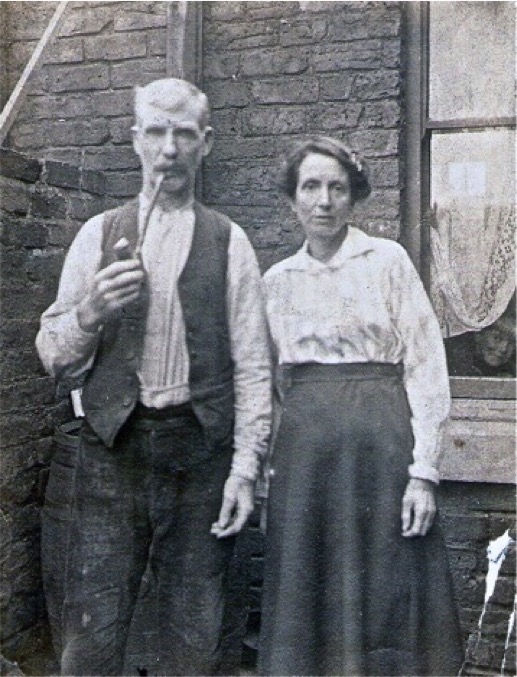 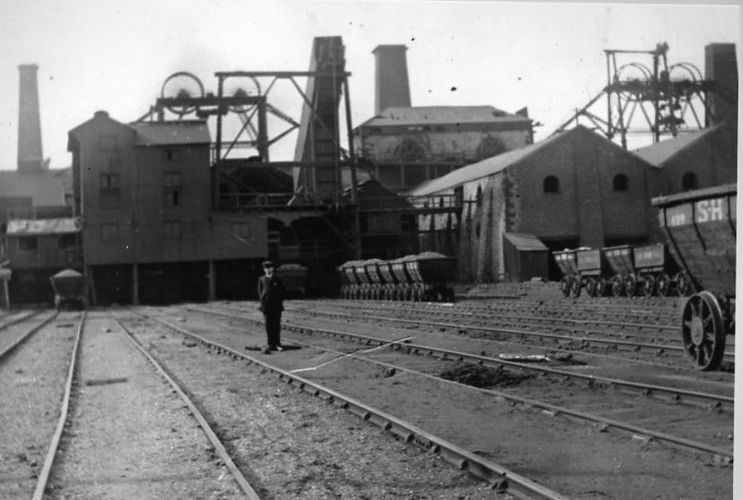 Top: John James Dix and Elizabeth Lawson Garwood at home in Sunderland, probably mid-1920s. The child's face in the window is probably that of son, George.   Above:  Murton Colliery.

JOHN JAMES DIX was born in the autumn of 1874 in a coal miner’s cottage at Murton, a former hamlet seven miles south of Sunderland that before the mining boom had fewer than 100 residents. But in 1838, three mine shafts had been sunk into the rich coal seams. Miners flocked to the coal pit from across Durham county, from neighboring Northumberland and from southern England. By the time John Dix’s father arrived there in the early 1870s from Norfolk, Murton had become a substantial village of more than 2,000 people. 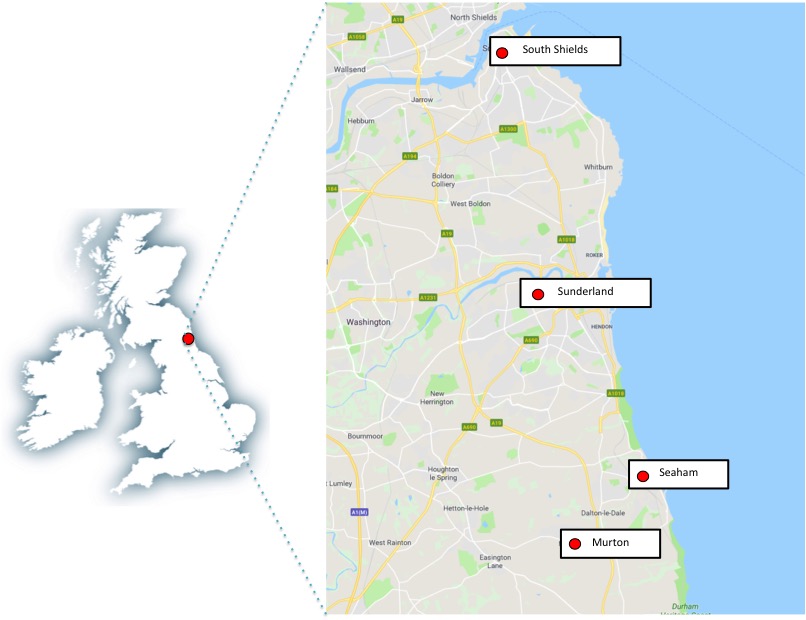 When John was six years old, his parents moved with him to the industrial town of South Shields to the north, where his father worked as a laborer at a chemical plant. He was the eldest of the other children in the family by ten years. He lost at least one younger brother and one younger sister, named after his grandparents, who died soon after birth, leaving a ten-year gap between him and his next oldest sibling, Ethel.

By the time John was 17, the family had moved south again, to the village of New Seaham, and both John and his father, Lewis, were working in the mine there.

In 1893, John’s father collapsed in the street and died from an attack of pneumonia. He was just 40 years old.  John was already looking for other kinds of work, and he took a job as a milkman when he moved to Sunderland shortly after. He was married in the Sans Street Wesleyan chapel two weeks before Christmas of 1894, to London-born Elizabeth Garwood. Elizabeth’s father, a former policeman, was one of countless working men who, like John’s father, had come north to the Durham mines to find more productive work and better wages.

Their first home together was at 42 Rothsay Street - a street where they lived for many years, though by 1901 they had moved to number 58. Later still they had three rooms at number 12, before finally moving into number 7. As the new century began, they had only one living child, named after her mother and known as Bessie. Tragically they had lost three babies within minutes or days of their birth. According to Cilla Dix, wife of Elizabeth’s son Stanley, Elizabeth bore it all with fortitude. Not very tall, she was nevertheless known as “the lady” in the neighborhood, holding herself very erect. In those days it was customary for the grandmothers to carry children to church for their christening. Whereas other women held the babies with both arms around the bundle, Elizabeth Dix held the child on one arm and walked very straight, with her other arm swinging very elegantly. According to Cilla, Elizabeth was a very kind, gentle person whom Cilla loved dearly. She would save odd pennies and buy pretty ornaments, and liked to place them on her mantelpiece.

On the 1911 census, John completed the form in a neat hand, noting that in their 16 years of marriage the couple has produced 10 children, but only four were living - Bessie, now 13, Flo, age 9, and the boys Robert, 7, and three-month-old baby John George. Their father describes his work as a hewer at the coal mine - no doubt Monkwearmouth Colliery. Over the next eight years four more children would follow - another girl, Doris, and three boys, Arthur, Stanley and George.

It was a strict home, but a happy one. Son Bob recalled many years later how the large family crammed into the three rooms of number 7: “In that three-roomed house was Father, Mother, daughters Bess, Flo, Doris, me Bob, John, Arthur, Stan, George. It was a struggle to get in, never mind be comfortable. We had a desk bed that used to fold up and all the boys slept together head to tail.”

About the year daughter Doris was born, in 1912, John decided to give up the beer common to most working men at the time, and save up to buy a business. It was a confectioner’s shop at the end of the street, and John and Elizabeth set about with a will to make it pay with plain hard work. John continued to work as a miner during this time. “Dad made his own ice cream, toffies and lucky bags for kids,” Bob recalled. “He made special toffies and called it ‘Dix stickjaw.’ I could write all night about my wonderful Dad - a very strict man, but a fair one. I loved him very much. As for my Mam, she was more than wonderful. She used to send us to the Warwick Street chapel twice every Sunday. She was a very good-living person and she used to practice what she preached. None finer than she. Yes, we all went to chapel, except Dad.”

To create a little more space, John built a conservatory attached to the house. He had only poor wood to build it, and he wasn’t a joiner by trade, but evidently he made a good job from what he could come by. That was the way of things in the first part of the twentieth century. Like other working class families, the Dixes managed to scrape through. There were few if any luxuries, but a strong ethic of honesty and hard work that spilled over to their children.

World War II was an anxious time for them, as for millions of other families. Four of their sons were in the armed forces, and Elizabeth put her foot down when eldest son Bob tried to join the Army. Instead, he joined the Home Guard. Son Arthur was killed fighting in Libya, North Africa, in the summer of 1942 just weeks before son-in-law Robert Otterson, Doris’s husband, was captured in the same general area.

Four years after the war ended, John Dix died at home, 7 Rothsay Street, of stomach cancer. He was 75. Elizabeth outlived him by only a year and a half. On a visit to son Bob’s home in Cudworth, near Barnsley, Yorkshire, she suffered a stroke and died within a few days. 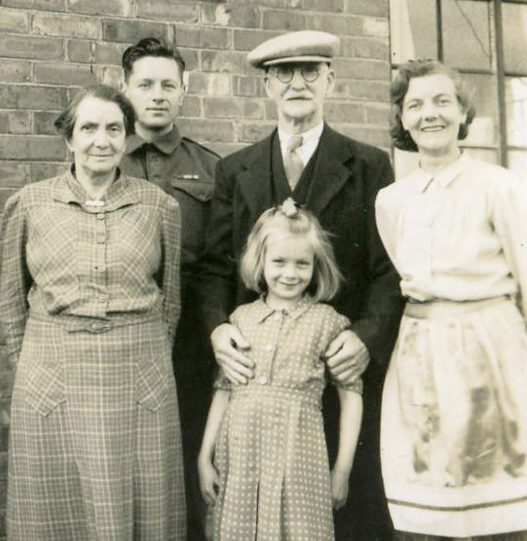 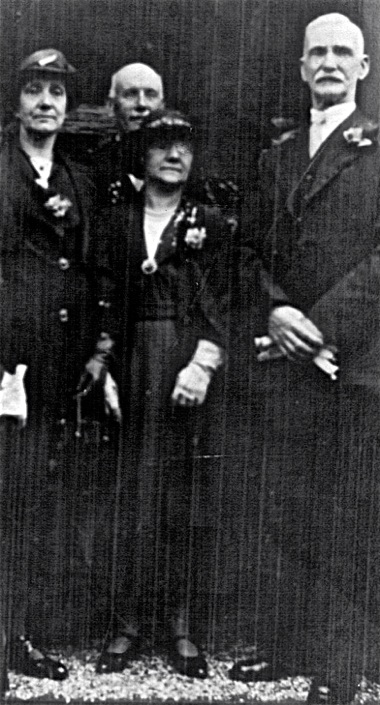 Enduring the Loss of Children

John James Dix and Elizabeth Lawson Garwood were married in Sunderland just six years before the close of the 19th century, at a time when Britain and other industrialized nations were undergoing dramatic social and demographic changes. In some ways, the fortunes of this one family are a reminder of the trials of working class families throughout Britain, especially when it came to the death of children and life expectancy generally.

John and Elizabeth lost four of their first five children before they reached their first birthdays. Their first child, named John after his father and born in September 1895, died at their Rothsay Street home after just ten minutes of life.  Second child Alice lived five days, while George, born within the next year, survived for only two days.  Fourth child Elizabeth was the first of eight children to grow to adulthood. Named after her mother, Elizabeth, or Bessie, lived to the age of 69. But parents John and Elizabeth would lose three more infants - George Robert and another John would die within a few months of birth, and Mary would die at age 3. Son Arthur was killed as a soldier in World War 2 in North Africa in the summer of 1942.

According to Doris Dix - one of three Dix daughters who saw adult years - her mother had 15 pregnancies in all, which means she lost half of her family, mostly through infant mortality.

Toward the end of the 19th century about a third of all deaths were occurring from infectious or parasitic diseases. Yet the personal tragedies of the Dix family came at a time when, paradoxically, infant mortality was beginning to drop in Britain. In 1900, 14 of every 100 newborns did not survive. This improved steadily through the next decades apart from the period of the Great Depression and World War 2. By the close of the 20th century, with economic prosperity, a National Health Service and technological advances in health care, fewer than six infant deaths occurred for every thousand births.

For people who lived before the first third of the 20th century, death and disease were an ever-present reality.