"I never heard him shout, argue, or say a bad word about anyone. He was humble and had such a lovely manner about him that not only created some beautiful memories for me, but ensured he was loved dearly by me and the family. I was always eager to visit Granddad and Nan..."

Memories of My Grandparents

By their grandson, Stephen Harris
(September 2018)

GRANDDAD was a thin man, about 5ft 8 inches tall. He was always well-presented, never unshaven, and had his hair cut short in the old-fashioned military style. He always wore shirt and trousers and, if he went out of the house, a tie and jacket as was the style of his generation. He was partially deaf in later years and wore hearing aids in both ears - they were prominent, not like the modern ones of today.

I never heard him shout, argue, or say a bad word about anyone. He was humble and had such a lovely manner about him that not only created some beautiful memories for me, but ensured he was loved dearly by me and the family. I was always eager to visit Granddad and Nan, either with other relatives, or later on my own as a teenager.

All the time I knew him he worked at the local cardboard box manufacturing factory which was located in Trumpers Way, a few roads down from where they lived at 97 Studley Grange Road. Never owning a car, he used to walk to work via a short-cut at the bottom of his road and over the Grand Union Canal bridge to the factory on the other side of the River Brent. He became a shift foreman and retired from that factory with a gold watch, so he must have worked there for many years. The factory was called Hygrade, I think. It was alongside the canal where he told me that barges used to collect the products in the early years for transporting along the Grand Union, which eventually went to Birmingham.

At one point he got me a job there for a few months. The factory produced cardboard boxes using massive machinery, with raw materials (paper) being hung on great big spindles like giant hay bales at the end of the machines which produced the cardboard. That factory operated 24 hours a day and was dusty and noisy and a big employer in the area. It no longer exists but Trumpers Way still has an industrial estate. 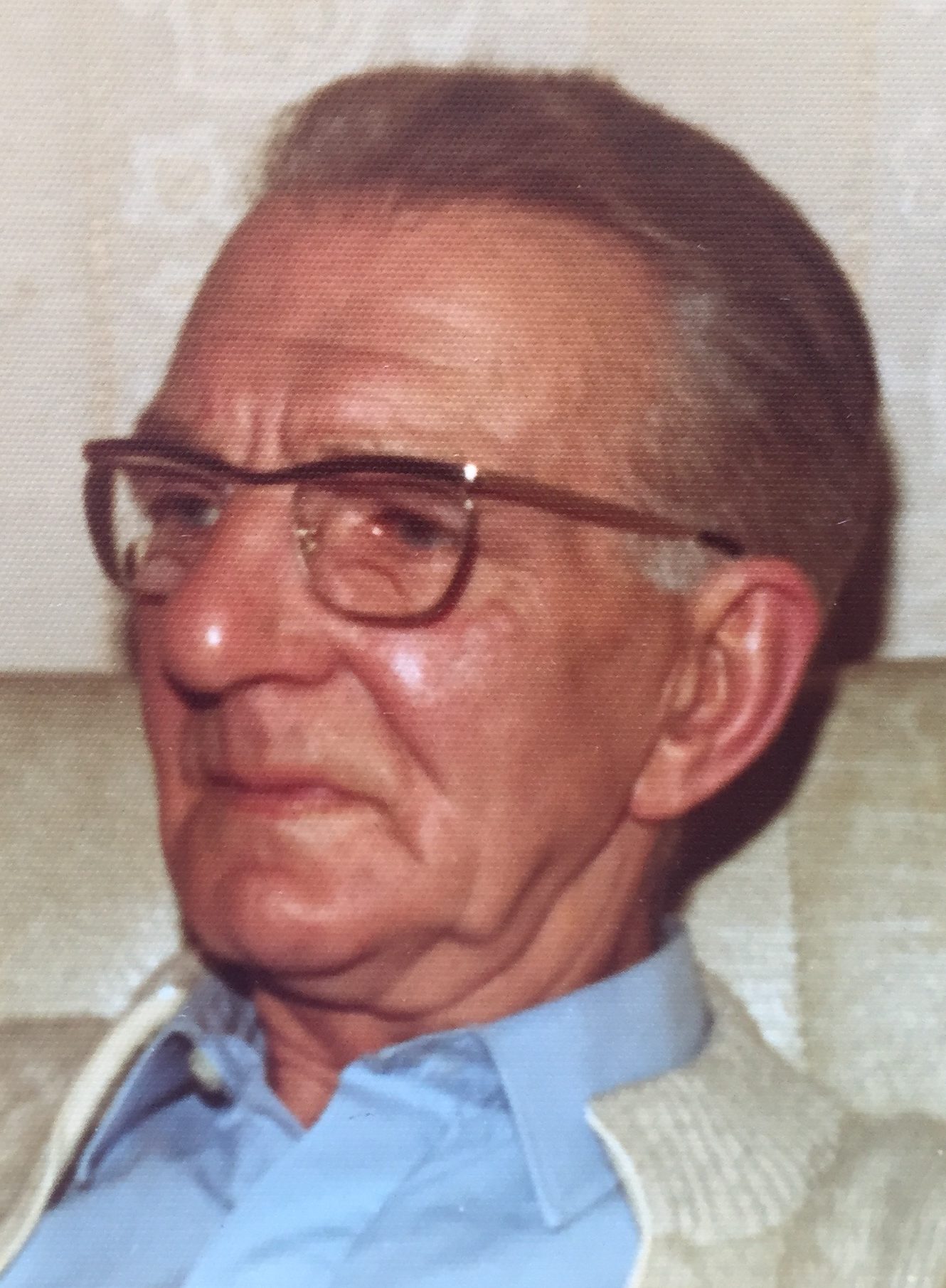 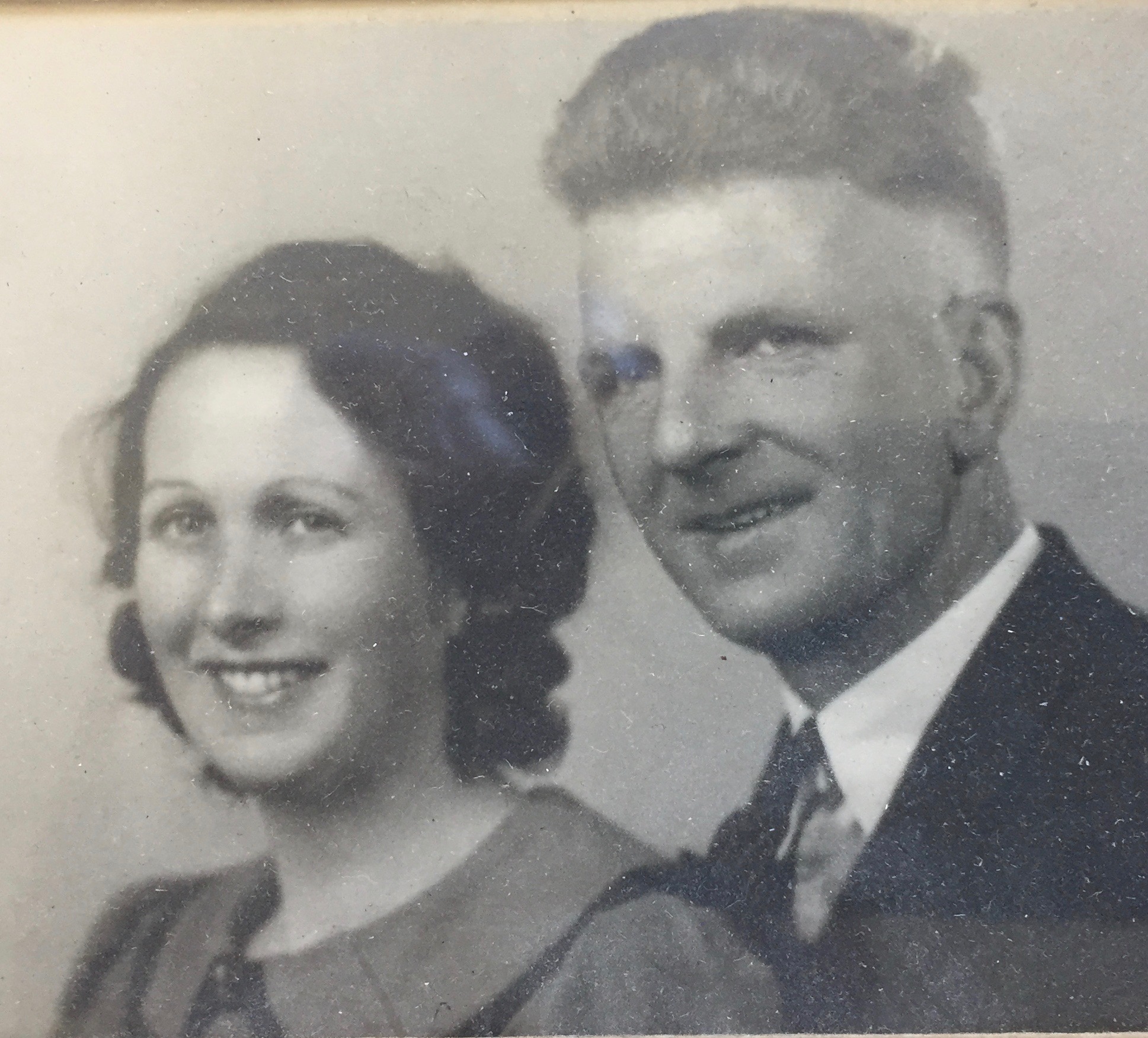 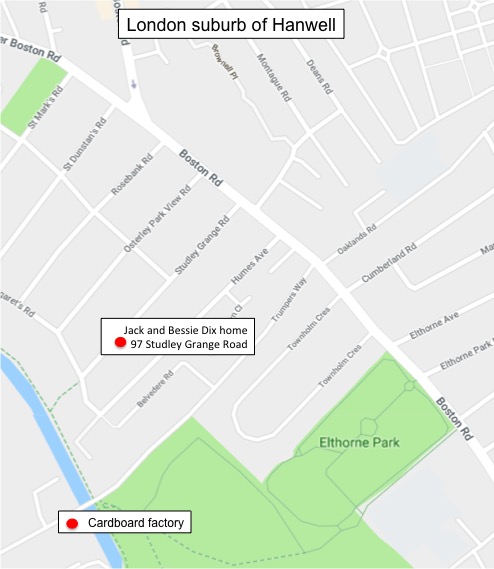 Map based on Google Maps

Their home in Studley Grange Road was a fairly large, three bedroom, end of terrace, traditional brick-built Edwardian construction, identical to many of the other houses in the street. The house still exists (below), albeit minus the perfectly trimmed hedge that Granddad shaped using his old wooden shears.

The house had a traditional side alley from the side kitchen door, which led to a raised garden and an outside toilet (they had an indoor one, too). Climbing some eight steep steps took you to the lawn, which was Granddad's pride and joy, always mown short, never any weeds, stripped and rolled using a home-made roller (according to my Uncle Roy Dix).

At the top of the garden, probably some 30 feet up, was another pride and joy, his greenhouse (men only allowed in there). He grew tomatoes every year and I recall he had an old paraffin heater to keep the cold away.

I first experimented with cigarettes when I was 12 along with many of my school chums. When Granddad found out (I probably told him because I trusted him), we often had a smoke sitting in the greenhouse chatting. Once, when I was around 16, my father (who was very strict) discovered a pack of cigarettes in my pocket and a massive argument ensued. Being a teenager, and now as tall as my father, the argument escalated, which resulted in me being locked out of our home. My mother arranged for me to be sent to my Granddad's house to stay. I stayed there for two weeks, having just become an apprentice in the printing trade. 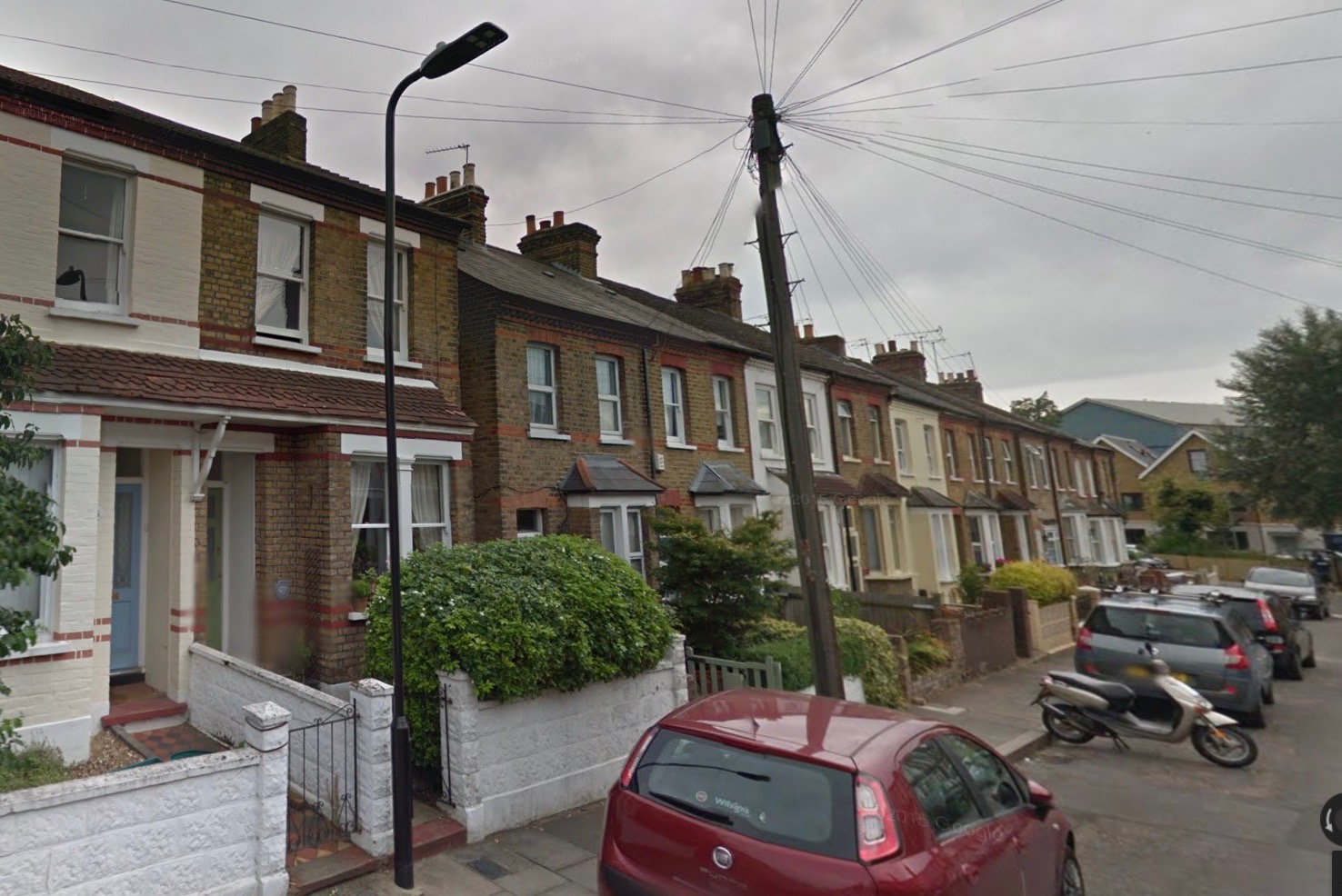 My grandparents' house was so cold, with only a two-bar electric fire in the rear living room (the front room was "for best" and we never sat in there). There was no other heating in the entire house and electric blankets were the order of the day. Without them I would not have coped, being a softy used to central heating. Reflecting now, I can see that this was a measure of how hardy they both were, never complaining and accepting their lot. There was ice on the inside of the windows when I woke up.

In Granddad's corner were all his nick-nacks on a sideboard, including his packet of cigarettes and an old fashioned Ronson silver lighter. His corner always had a damp patch on the wall and we discussed this on many occasions because he could just not get rid of it. When I was 15, I worked Saturdays in a paint and wallpaper shop in Acton called Fads, a well-known chain of stores in the area. I sought some expert advice and will always remember carrying a five-liter can of sealing paint, walking from Uxbridge Road to Granddad's house, proudly presenting the solution. My hands were sore after a good 15 minutes carrying that! It never did resolve the damp patch, and I suspect the cause was something more sinister.

Nan was a large-built woman, not tall, but could "talk for England." Nan would always talk about food, what she was cooking, and what they had for dinner. Nan was an excellent cook with great stews and most of all I remember her baking. My love of bread remains with me today, but she could make a loaf of bread like I’ve never tasted since. Unlike today, when home baking mostly uses dried yeast, she mixed fresh yeast with sugar (which she got from a local baker's) before adding this to the mixture. The smell of baking bread was intoxicating, and all the family especially loved a slice of bread and butter - thick, Lurpak, fully salted.

Grandad and Nan always sat in the same chairs in the back-living room, Grandad in one corner and Nan in the other. Nan used to knit quickly, and because she and my mother both knitted I wore some very comfortable cardigans and jumpers. Nan specialized in stitching the arms to the bodies.

Like my grandad, Nan was a loving woman who was always pleased to see me. After Grandad passed away I used to visit her, and once I learned to drive I would often take her out for day trips. She suffered terribly with arthritis later in her life, having to use a Zimmer walking frame to get around the house. Later she moved to residential care in Fareham, southeast Hampshire, near my cousins. She broke her hip and could only get around in a wheelchair, but she could still talk. One day I took her out to Windsor Castle (in the days when you didn’t have to pay to get in) and we watched the guard parade. We were given front-row seats because Nan was in a wheel chair. She was over the moon with the attention. 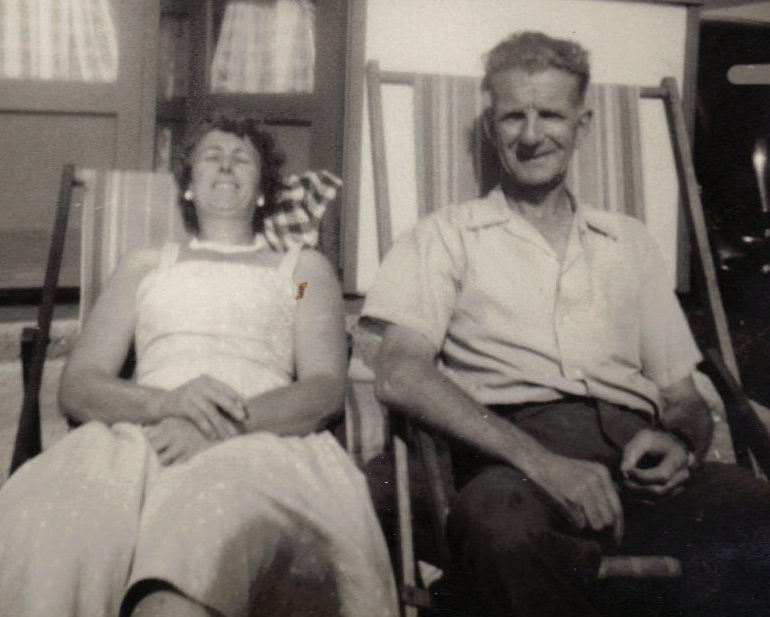 A Glimpse of the Neighborhood

During my teenage years, the area had many corner shops and the occasional shop mid-street, in common with similar neighborhood communities. About 10 doors up the road there was an old sweet shop where I used to spend my pocket money, as Grandad always gave me half a crown. The shop had an old wooden door with a bell tinkling each time it opened. At the top of the road, towards Boston Manor Road, was a fantastic fish and chip shop. The chips were the best, served up in newspaper and fried in beef dripping. This would be frowned upon today but, my goodness, they tasted so good.

At the bottom of the road there was a pig farm, and when the wind blew the wrong way you knew it was there. (This has now been developed for residential properties). Over the back was the Grand Union Canal and we often went for walks along the canal to the Three Bridges (rail, road and canal bridge crossings). I recall that my uncle John Dix, his wife June and sometimes Grandad (but never Nan) used to walk John's Alsatian dog called Kim over the fields.

Alongside the canal was the Hanwell Insane Asylum. The walls and the entrance still exist (see below). I know a little about this as my mother, Gillian, started her working life as a state-registered mental nurse there and told me stories of the new employee induction tour. The new students were given tours of the “cells” at a time when the medical response was merely to chain the patients to the wall.  - Stephen Harris

Above:  Jack and Bess Dix relaxing in the sun.
Below: Jack with grandson Steve Harris, at the annual Hanwell carnival, about 1967.
Bottom:  Jack Dix's military service record showing World War II service. For part of the war, Jack served in Africa, probably in the same theater of war as his younger brother, Arthur, who was killed in 1942. Page 3 of the service book says Jack had a tattoo on the inside of his left forearm - clasped hands with the name of his wife, Bess. 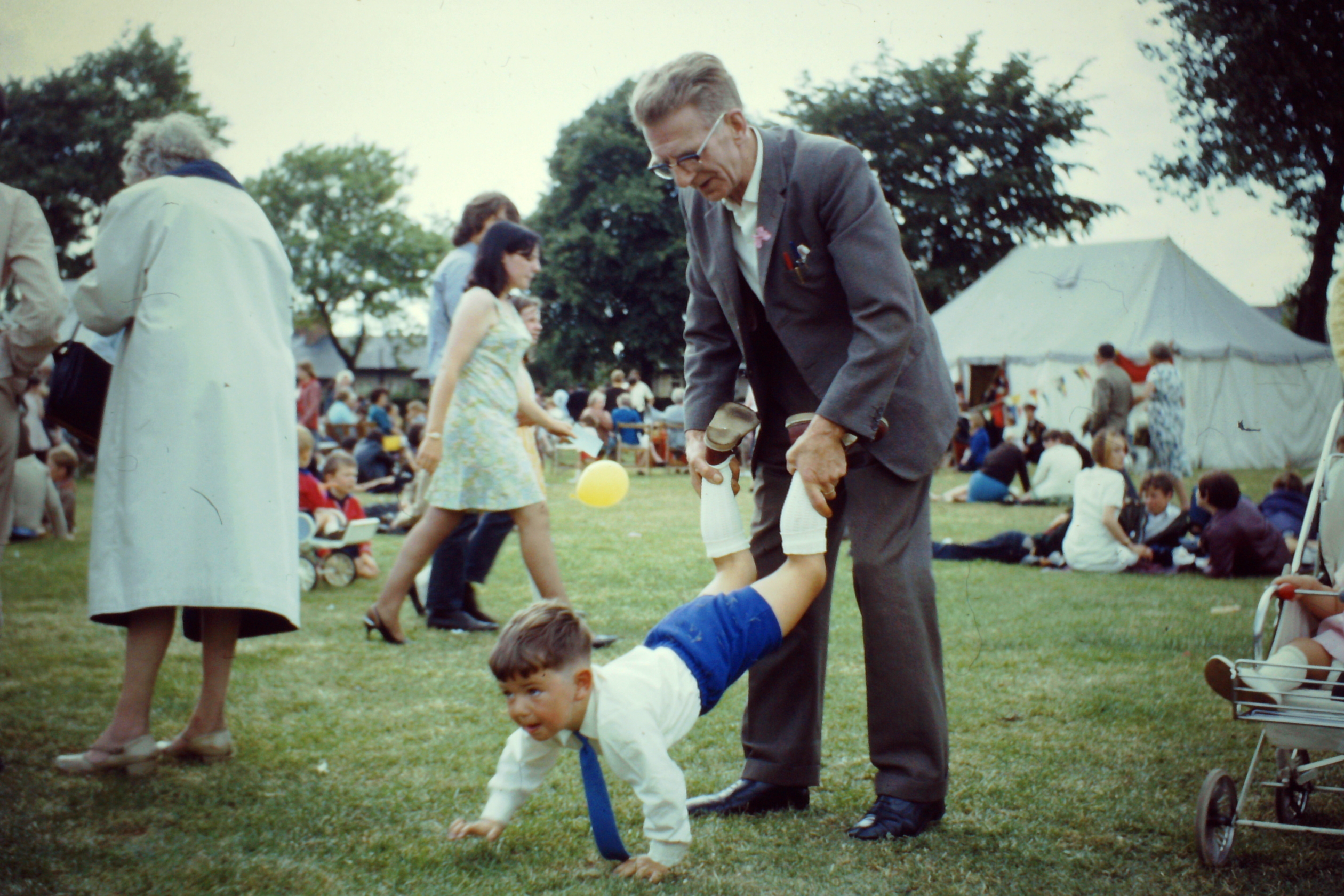 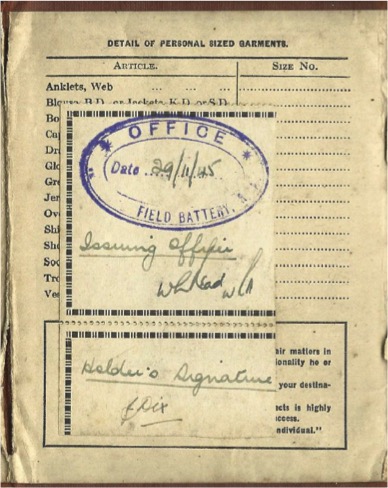 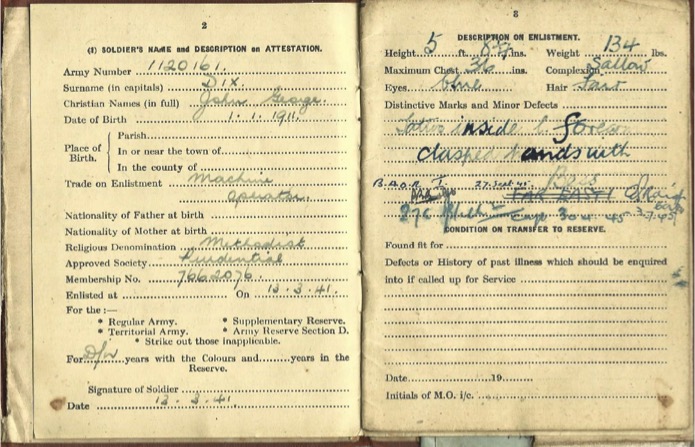 Military records in possession of Steve Harris.
Leave a comment