"We can empathize with Martha, her father and her son, on the tedious journey to the workhouse, publicly labeled lazy or incapable of proper work, and facing a future that must have seemed hopeless." 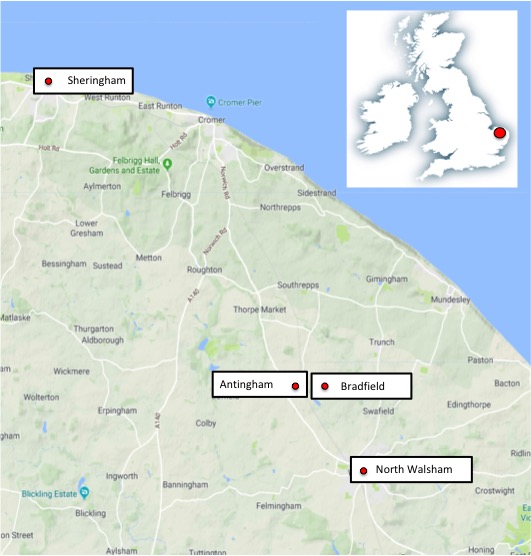 THERE IS NO WAY we can look back at the life of Martha Dix and feel anything but sympathy for this woman who endured prolonged trials in her life.

She was born in the small Norfolk village of Antingham, the second child and first daughter in a family of farm laborers. We don't know anything about her childhood or her teenage years in that rural community. She is unlikely to have received any formal schooling.  English society in the early 1800s was largely opposed to the education of the poorer working classes, strange as that seems to us today (see panel below).

Such attitudes guaranteed that the poor would remain poor, and only by extreme good fortune would they ever break out of that economic prison.

The first glimpse we have of Martha from official records comes in the 1841 census. From this we learn that at the age of 23, unmarried Martha gave birth to a baby boy. She named him Daniel, and by the time of the census he was seven years old. Martha, Daniel, and her father Matthew, are all inmates in the Sheringham workhouse where she worked as a cook, and all three are listed as paupers.

It's easy today to read such records and to simply make a mental note that these were hard times for the poor. But their circumstances merit further thought. Having an illegitimate child in a small rural village would have brought embarrassment enough to the family. But on top of that, father Matthew couldn't support himself, let alone Martha and her son.

When Member of Parliament Samuel Whitbread attempted to advance his Parochial Schools Bill of 1807, he ran into stiff opposition. During the House of Commons debate on the bill, Tory MP Davies Giddy imperiously declared that giving education to the laboring classes would be "prejudicial to their morals and happiness," and explained that

"... it would teach them to despise their lot in life, instead of making them good servants in agriculture and other laborious employments to which their rank in society had destined them; instead of teaching them subordination, it would render them factious and refractory, as is evident in the manufacturing counties; it would enable them to read seditious pamphlets, vicious books and publications against Christianity; it would render them insolent to their superiors; and, in a few years, the result would be that the legislature would find it necessary to direct the strong arm of power towards them and to furnish the executive magistrates with more vigorous powers than were now in force. Besides, if this Bill were to pass into law, it would go to burthen the country with a most enormous and incalculable expense, and to load the industrious orders of society with still heavier imposts." (Hansard House of Commons 13 June 1807 Vol 9 Cols 798-9). 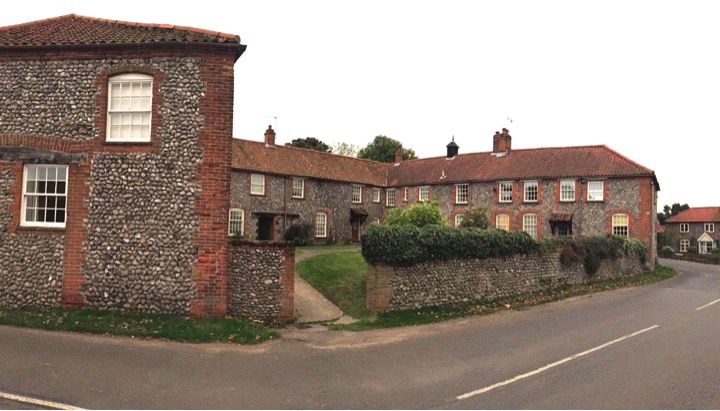 Sheringham workhouse as it is today. After its service as a workhouse, the building became a school before being converted to attractive homes.

We don't know exactly when they left Antingham for the Sheringham workhouse, but we can, perhaps, visualize the journey. Upper Sheringham, where the workhouse was located, is about 12 miles from Antingham. Transport in the mid-1800s would have been by horse and cart at best, or they would have walked. We can empathize with Martha, her father and her son, on the tedious journey to the workhouse, and like all paupers publicly viewed as lazy or incapable of proper work, and facing a future that must have seemed hopeless.

It was not hopeless, however, and some time in the next few years Martha's fortunes lifted. In 1848, seven years after the census showed the Dix's in the Sheringham workhouse, Martha married a 52-year-old widower and laborer, William Pooley, in the village of Bradfield, just a mile or so to the east of where she was born. It would have been the first time that 14-year-old Daniel had a father in the home. 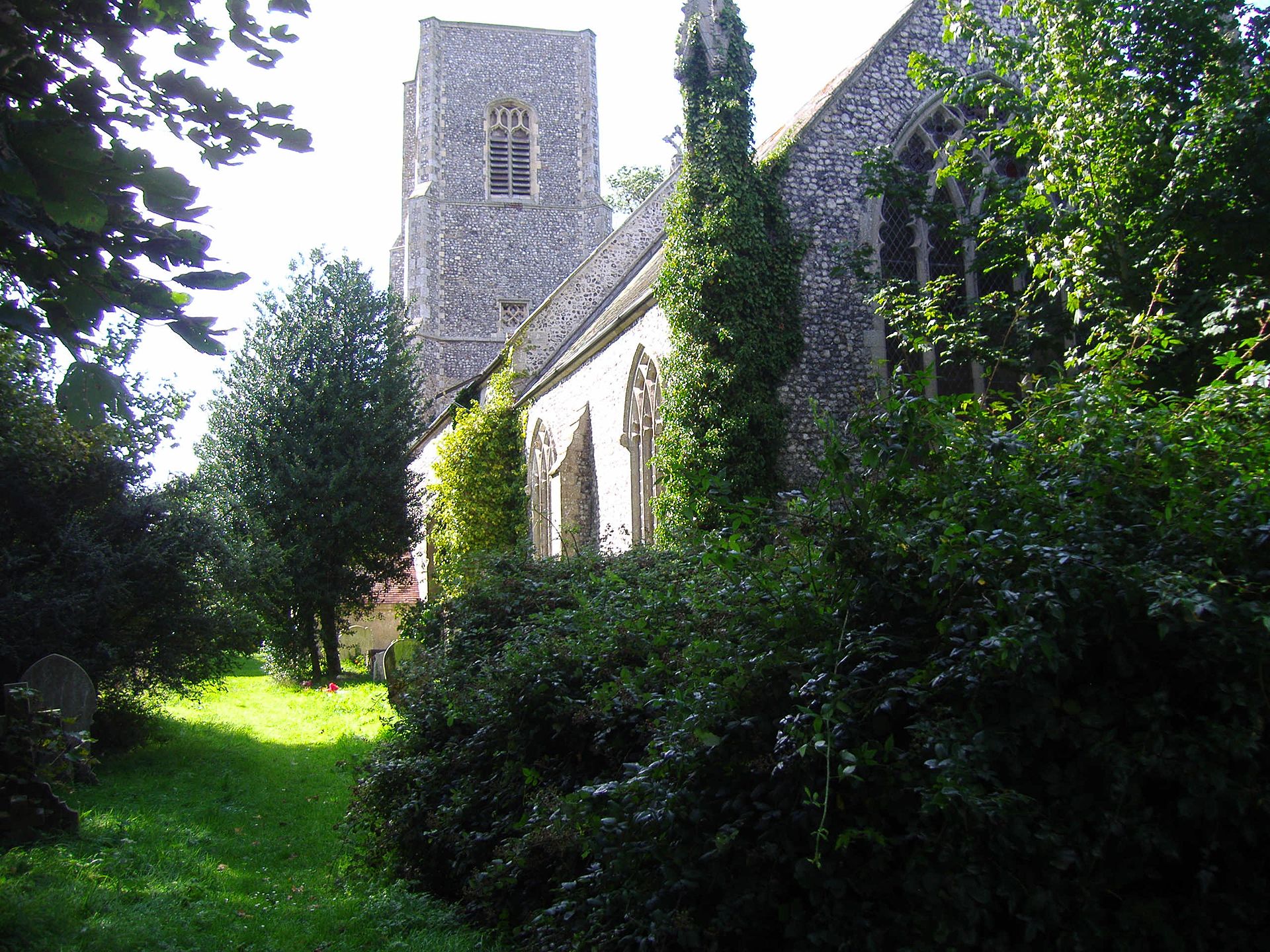 The little family evidently lived in Bradfield, because both bride and groom gave the village as their place of residence for their marriage certificate. Martha's brother and sister, James and Mary, were witnesses at the Bradfield parish church of St. Giles. Sadly, however, the marriage was to be short-lived. William died less than two years after they married. He developed a high fever which turned into pneumonia, and after six weeks he died at the Hospital at St. Stephen, Norwich. Founded in 1771 as a charitable institution for the care of "the poor and the sick," William's death there reminds us that the family was still among those poor.

Martha kept the Pooley name. Daniel remained a Dix. By the time of the census in the spring of 1851, Martha, now listed as a widow, was living with Daniel, who was age 17 and working as a farm laborer. His wages would have been just enough to support his mother along with what she could earn herself - she never returned to the workhouse. Her father, Matthew, was also out of the workhouse by this time, but living in humble circumstances as a lodger in the village of Antingham, with other farm laborers and a pauper shoemaker.

Some time before 1861, Daniel joined the British Army - a decision that would change the whole course of his life. His mother by then had moved to the ancient market town of North Walsham, and lived on her own in Back Street, earning her living as a charwoman, or house cleaner.  The street skirted the eastern end of the unusual 14th century church of St. Nicholas, famous for its landmark collapsed tower that fell in 1724. Martha would live in that same street for the rest of her life. Today it is renamed Church Street.

Looking back on her hard life, Martha may have sometimes wondered what she had to show for it. But that single, illegitimate son showed enough drive and initiative to make army life successful for him. Before she died, she would have known of Daniel's success in the 61st Regiment of Foot. He became a hospital sergeant, traveled to distant parts of the world, had a family of four daughters, and became an innkeeper. His posterity today continues in Britain and Australia. 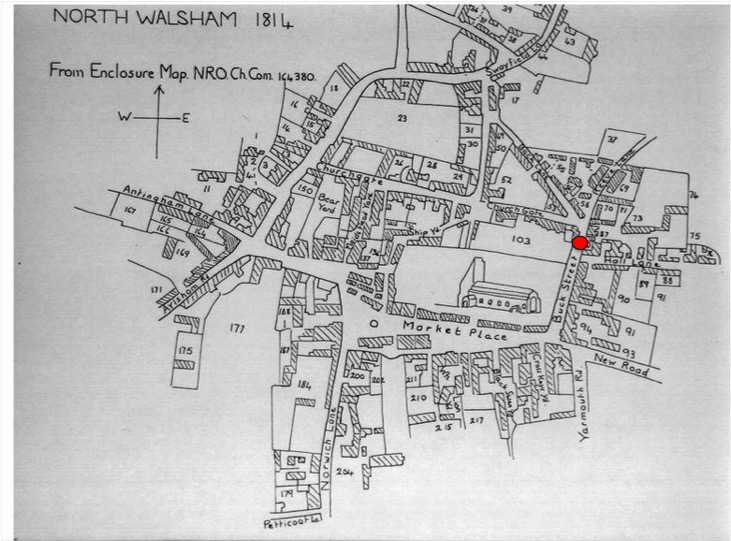 Left:  1814 map of the market town of North Walsham. St. Nicholas church is shown at the center, and the market place just below it. Martha Dix lived in Back Street, marked by the red dot, literally a stone's throw from the church. The street is now known as Church Road.

Below left: St Nicholas church with its collapsed tower that has never been rebuilt.

Below right: Inside St. Nicholas church. 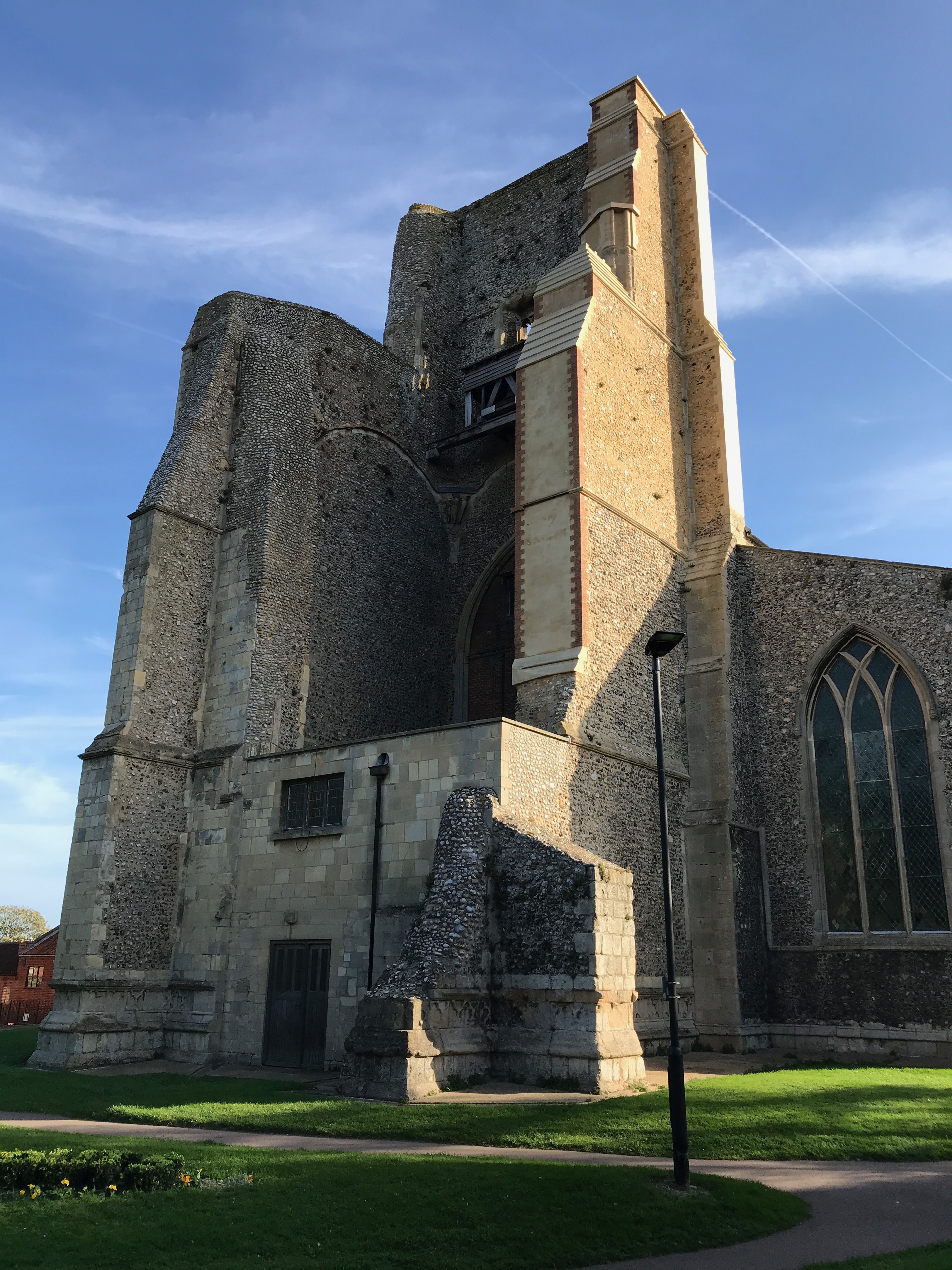 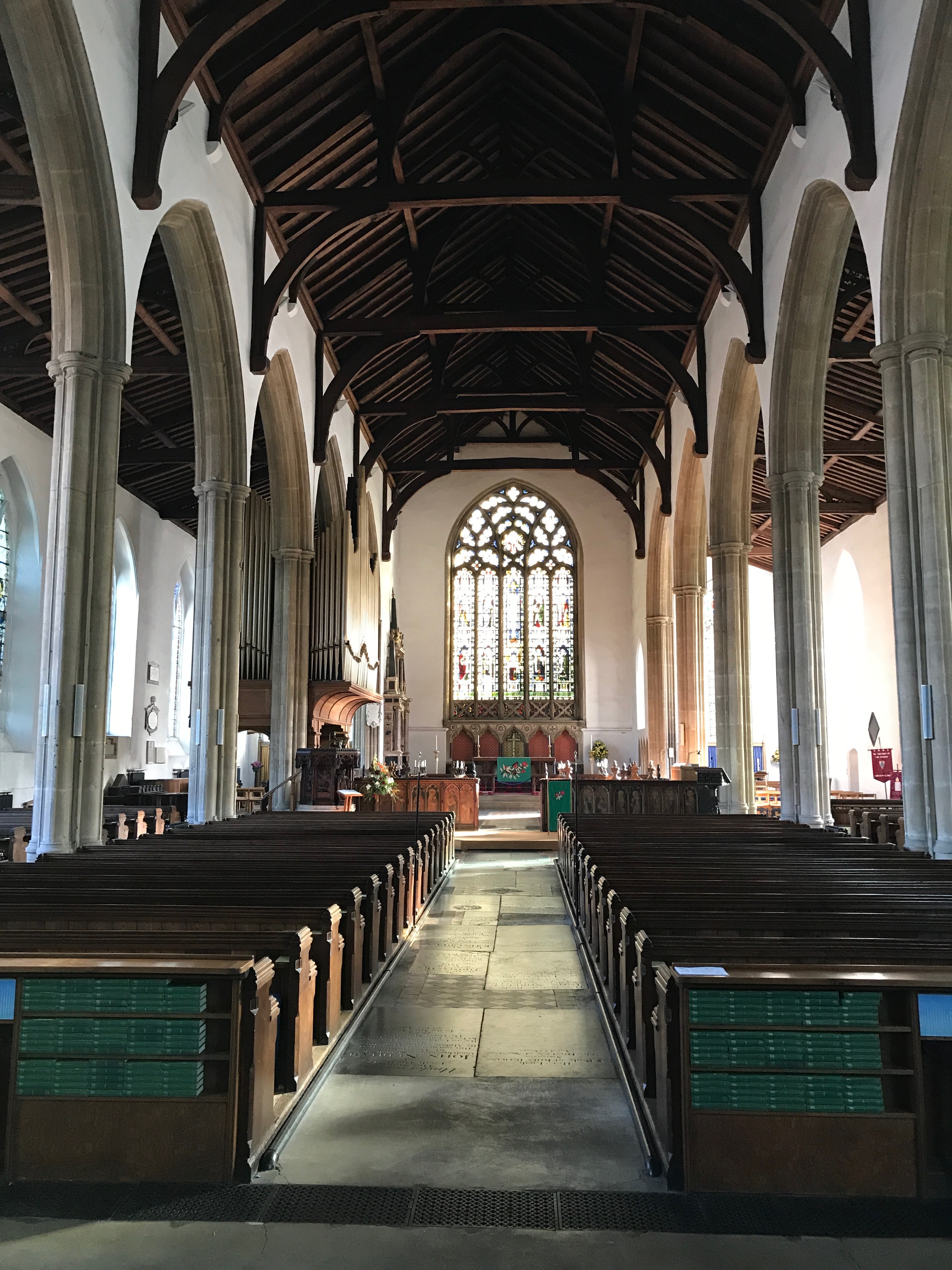 Right:  A Dix tombstone set in the main aisle of the church. Did Martha Dix ever look at this and wonder if she was related?  Only the most prosperous and accomplished in the community had tombs in churches. In fact, no relationship has been established. Dix was not a rare name in Norfolk. 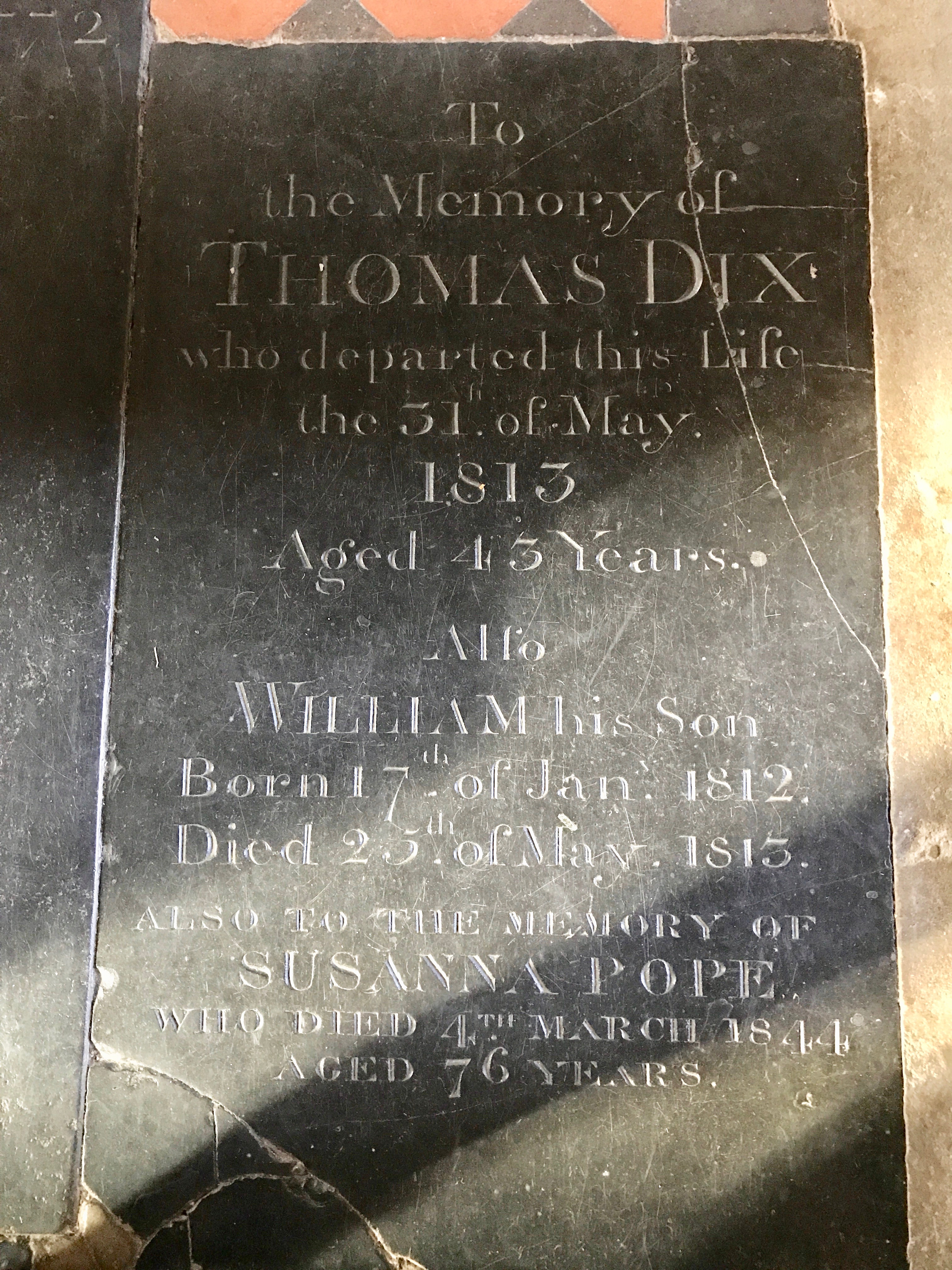