"Four years of war have passed over since we heard that fatal announcement over the radio. To me it seems a much longer period. However, if the present optimism in the camp is justified, it may not be long before we are together again." 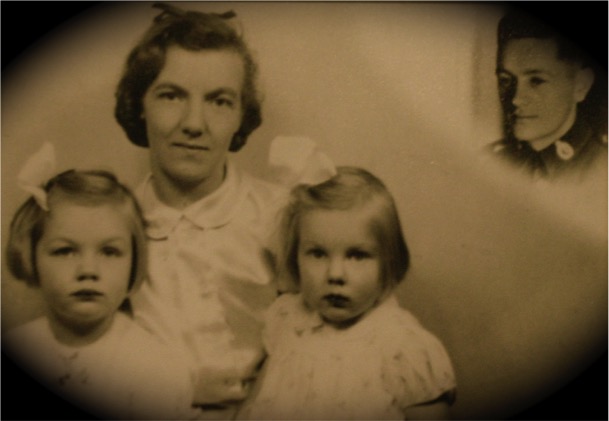 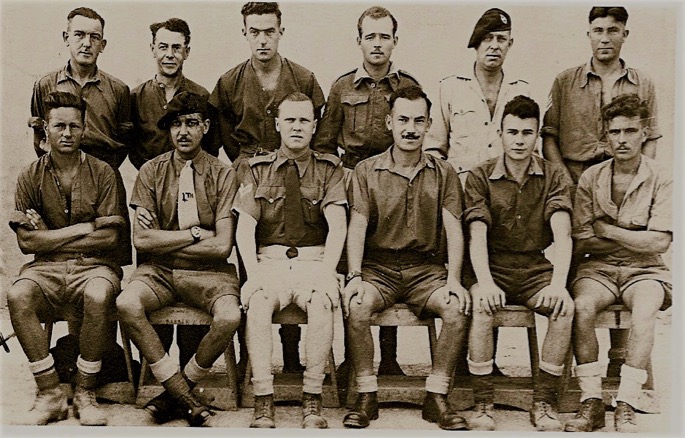 Top: Wife Doris Dix Otterson and their two little girls, Ruth, left, and Ann.  At such times, when men were away at war, it was common for their image to be included in a photograph with those left behind.
Above right:  Robert Otterson in a camp photograph, 1943. He is slim, but tanned and looks fit. He was always an advocate of physical fitness.
Above: The full group photograph.
Below, right:  Maps of the Italian POW camp locations.

The letters Robert Otterson wrote to his wife, Doris, from the Italian camps parallel the time period covered by the Italian Diaries, from the end of 1942 to September 1943. And like the diaries, their tone is increasingly optimistic. He is constantly reassuring in his letters, and there is not a trace of self-pity.

With the conditions of semi-starvation at Benghazi now only a memory, he had time to write of food, friendships and even camp sports.

In particular, he talks tenderly about his family, and acknowledges that his eldest little girl is "not a baby any more."  Clearly, his thoughts are on an imminent reunion - hopes that were soon to be dashed. 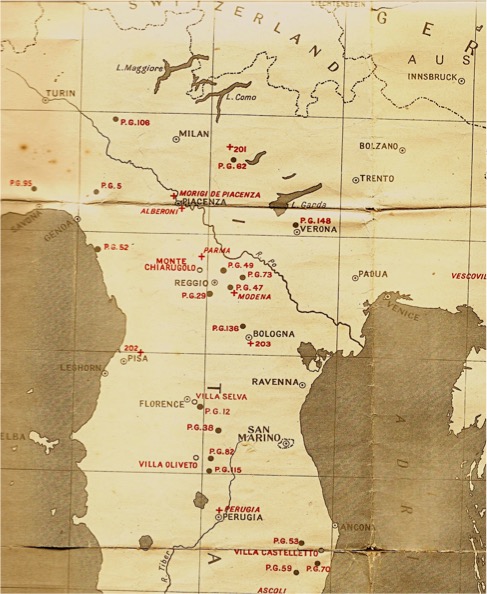 Extracts from the Italian letters

It is grand to be able to write to you every week...My time is chiefly occupied in Bible study, learning the Italian language, and writing books. I have completed a romance, and am busy with one entitled “God in a POW Camp.” We have recently received warm clothing. Before sending parcels, get full particulars re contents and despatch from Red X. If possible I should like a thick note book, diary, fountain pen (cheap), socks, razor and blades, toothbrushes, and all things mentioned in last letter, especially eats. I do not smoke but cigarettes are useful for currency and for my friends. I am at present in a transit camp from which I expect shortly to be moved, but continue writing to the same address until you receive the new one as mail will be forwarded to me.

Since last I wrote we received some Red Cross food parcels on the basis of two parcels among five men in fifteen days ... These mean a great deal to us as we are receiving sweet stuff and vitimized food for the first time in six months ... I understand that when we get a permanent camp the issue of  Red Cross parcels will be regular. We are all extremely grateful to that organization. We were like children whom Santa Claus had visited ... I have heard that you may only be allowed to send one parcel in three months, and this containing no food. If this is correct please send socks and underclothing first ...

X’mas Day was the happiest we have had since our  capture ... We had Rex X parcel of X’mas fare ... longing for letter from you.

I promised to tell you the contents of the Christmas parcel of which I had half. There was 1 tin of butter, Nestles milk, meat & macaroni, steak & kidney pudding, Xmas cake, Xmas pudding, jam, sweets, choc. biscuits, a 1/4 lb. of chocolate, pkt. of tea. We had the best feed since being captured. ... It needs the exercise of much self control to make a parcel last until the next is issued. 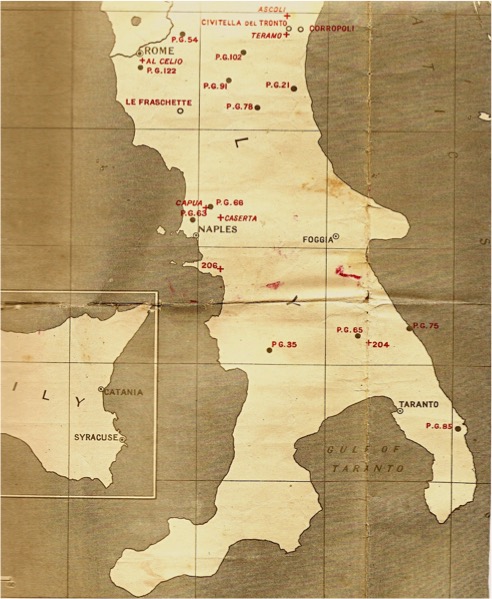 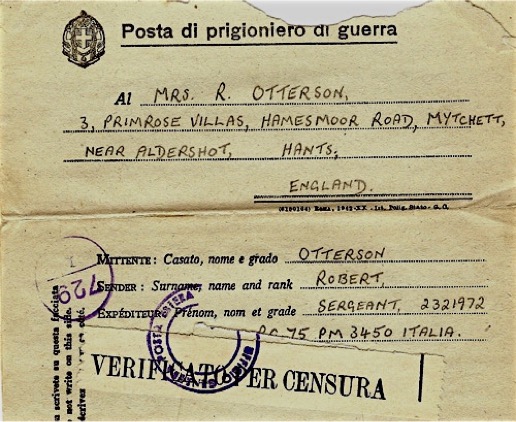 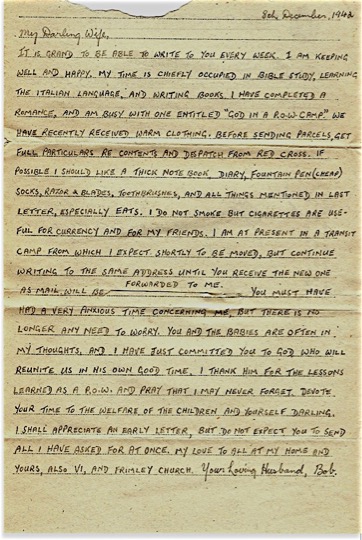 I did not know it could be so cold in Italy ...We had snow yesterday ...Try to get in touch with Red X and maybe they can send me some books to study. I suggest “Freeholdings,” “Poultry farming,” “Wireless,” “Italian language” or any theological book.

Ann should be toddling around now. and Ruth should be almost big enough to take care of her ...

We are being issued with Army underclothing today which is another blessing for which we are  heartily thankful.

... I received your first letter. I see it is numbered “6” and dated 16th Jan, so presumably there are other five somewhere on the way to me. You can imagine how overjoyed I was to see your writing again ...

I rejoice to say that I have received four letters from you ...

... Four days ago we were moved to another camp as you will see by the change of address ... We arrived on a fine day but since then it has rained for over 36 hours continuously, and we are under canvas. Our bedding was soaked through the tent pole collapsing.

We are now allowed to light fires three times a week for cooking purposes ...

I am still trying to learn shorthand, but the other classes came to an end when we moved.

We have moved into a larger compound of the camp since last I wrote. There are more facilities for sport here, of which I avail myself. I am also living in a bungalow, which has certain advantages over tents.

The weather is beautifully warm now and I made the most of it either by sitting in the sun reading library books, playing sport or walking around the compound. The Red X have sent  football and cricket kit, tennis quoits and nets, boxing gloves, table tennis and musical instruments. We have a concert or a lecture in the bungalow every evening. Red X food parcels continue to be issued once a week.

We got paid a few days ago, and I have been able to buy oranges, apples, figs and onions in turn from the canteen. I made some marmalade from the oranges and the sugar from a Red X parcel. The figs I had with my mid-day rice and macaroni. I have written to the Paymaster today asking him to submit £25 from my credits to my account at Lloyd’s Bank, Frimley Green; so don’t be surprised if the bank balance suddenly soars by that amount. When that does occur, I should like you to send £5 to the Red X Soc. ... I am still keeping fit and do P.T. every morning ...

I am pleased to say I received your letter No. 22 dated 12/3/43. Numbers 14 to 21 are still on the way somewhere ... I told Ted you had written his wife, for which he thanks you. It is a great pleasure to know that you are doing what you can to bring happiness to the soldiers in the district.

I baked a very nice fruit loaf last week. I won’t tell you the ingredients used, but you must let me try my hand at some POW dishes when I get home...You couldn’t parcel Ruth or Ann up and send them I suppose - or better still - bring them?

I have been just over a week in my new camp and am gradually getting used to it. The surrounding country is very beautiful. There are hills all around and in the distance mountains which, when I first arrived,  were capped with snow. I have  met up with a number of fellows in this camp who belonged to my unit before I was captured. I was particularly glad to meet again a young chap who was on my truck the night I was wounded ... You ought to be enjoying the sunshine on the canal bank now, watching the dragon flies darting and hovering.

Complaint re kisses noted. Hope you realize that letters are censored, in which case a row of kisses may be thought to represent a code. Caution bade me think you would prefer a kissless letter than none at all. However, I will be discreet and make amends when I get home.

I am enclosing a photograph which I hope will reach you safely. Look for a “darkie” on the photograph and that is me.. the majority of the group are from the Aldershot district ...

I was delighted to receive a photograph of yourself and the babies on 8/7/43. You are all looking very well. Ruth holds her head like a little princess, and hasn’t Ann grown? ... It is easy to trace the beautiful lines of their features in the profile of their mother. Just like some exquisite flower, with a bud coming in to blossom on either side.

There have been some exciting football matches of an international character, such as England v Scotland and Ireland v Wales. The enthusiasm the matches aroused was almost as great as that in professional games. Of course it is also very pleasant lying on the grass in the sun. Perhaps I ought to be ashamed to say that much of my time is spent in the prone position watching lizards chasing each other, or flicking off my body innumerable ants. It is a surprising thing about these ants. One looks around carefully before spreading a blanket on the ground to lie on, and fail to see an ant in the vicinity. You can bet your boots however that they will be doing some mountaineering on your chest before you have been down ten seconds.

Had no mail for two weeks. One day, perhaps, I shall beat these letters home. Kiss Ann and Ruth for me.

Four years of war have passed over since we heard that fatal announcement over the radio at Bulford. To me it seems a much longer period. However, if the present optimism in the camp is justified, it may not be long before we are together again.

You and the babies are never completely absent from my thoughts. Make an extra large Christmas pudding for I hope to help you eat it

I must remember not to call Ruth a baby any more. Have you thought of a good school yet? Both she and Ann must have the best education we can give them.

This is the last letter from Monturano. The next was sent from the Stalag IVB prison camp in Germany.