9. The Move to Germany: Stalag IVB

"The name of Stalag IVB became rooted in the memories of countless families who sent letters and parcels to the oddly sounding address somewhere in Germany, in the hope that they would reach their absent fathers, husbands, sons and brothers." 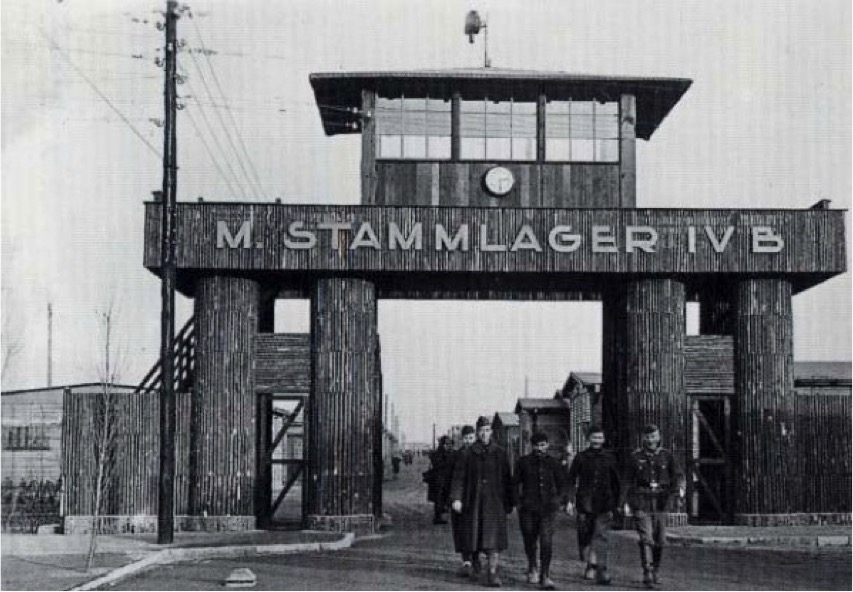 On the train to Germany

The suddenness with which their new German guards ordered British POWs to pack up and ready themselves for a move from the Italian camp at Monturano on the afternoon of September 23, 1943,  should have told them something.

Rumors were circulating among the prisoners that in the wake of Italy’s capitulation the men were only being moved a short distance to another Italian camp - No. 53 to the north. No doubt the German guards were happy to foster such rumors, but if there had been doubts among the men those doubts must surely have been confirmed when they were issued rations for three days.

After being herded into cattle trucks at San Giorgio station - 40 men to a cramped wagon - Robert Otterson concluded the last five days of his Italian diary for that September with the following entries:

Although he does not name it, the transit camp at which he had arrived was Zeithain POW camp, close to the Jacobstahl railway station and about four miles from the small town of Riesa on the Elbe River. The huge camp at Stalag IVB lay some 15 miles beyond.

Robert Otterson and the other British POWs could not have known of the horrendous history of the Zaithain camp. It was a place primarily for the confinement of Soviet prisoners of war, and the official Nazi policy toward the Russians - even cooperative prisoners - was one of brutality and extermination. Thousands of Russians had already died at the camp in 1941 and 1942 in appalling conditions. Other prisoners there have described sleeping in the same bunks and barracks as Jews who had been exterminated. One POW describes the lavatory as a pole over a pit which the former Jewish inmates were forced to clean with bare hands. Today, a 15-foot red granite obelisk marks the mass Soviet graves.

There is no other mention of Jacobstahl by Robert Otterson, and we do not know exactly how long he was there. It may have been only a day and night and these POWs must have been physically separated from the compounds where the remaining Russians were held - maybe even some distance away - or he certainly would have noted something. His first post card sent from Germany seems to have been written from there, though it bears a Stalag IVB postmark of 23 October. Quite possibly it was written at Jacobstahl/Zeithain but not sent immediately.  In his German log book, Robert Otterson lists his record of service and, while including the short stay at Derna and at Tripoli, he ignores Jacobstahl altogether and marks the start of his Stalag IVB experience as 28 September. 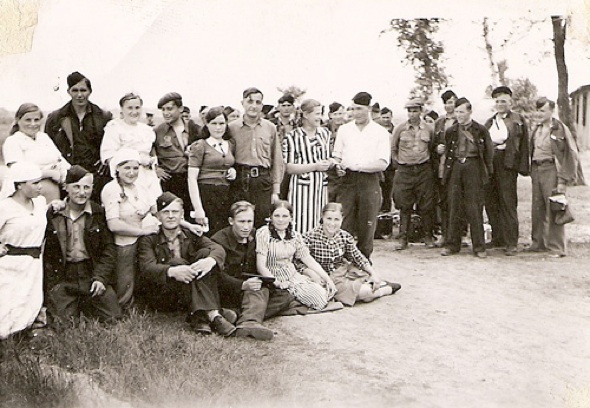 There is also a curious undated photograph (above)) in Sgt. Otterson’s war time log of his German captivity. It is captioned “Russian POWs Jacobstahl, Germany." It shows a smiling group of what appears to be healthy-looking Russians, including women and what may be nurses. It is certain that there were no smiling Russians at Jacobstahl/Zeithain before the spring of 1945. The photographer is unknown.

From available records, it appears Sgt. Robert Otterson spent about 20 months as a prisoner of the Germans, virtually all of it in the camp known as M. Stammlager IVB.

The word “Stammlager,” literally base camp, was used for POW camps throughout Germany. Usually, it was shortened to Stalag, and so for thousands of Allied prisoners Stalag IVB in Wehrkreisen or Army District IV became home for their final stretch of World War II. The name also became rooted in the memories of countless families who sent letters and parcels to the oddly sounding address somewhere in Germany, in the hope that they would reach their absent fathers, husbands, sons and brothers.

Stalag IVB was situated on a wide expanse of flat and windy farming land between the small villages of Burxdorf and Neuburxdorf in Saxony, about four miles east of Mülhberg on the River Elbe and about 70 miles to the south of Berlin. It was a huge camp - possibly the largest in Europe - and at times held up to 16,000 men. Some stayed there for almost the entire war.

More than 40 postcards and letters that have survived from this period (summarized on a separate page), and a log book that deals with the end of his captivity, all provide an insight into life in the camp.

His diary covers only the period from Christmas, 1944, through to his return home in May of 1945, but with long gaps in between. Nevertheless, some of his short narratives are vivid, even poignant. 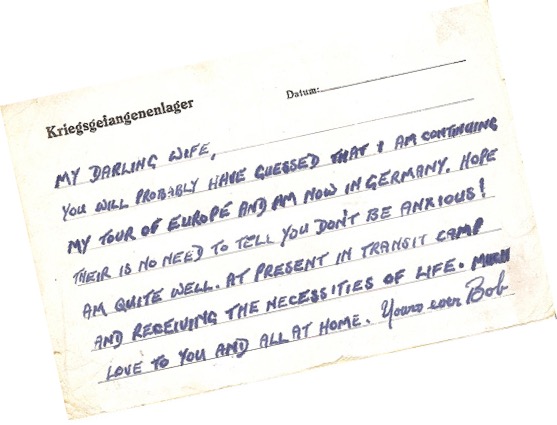 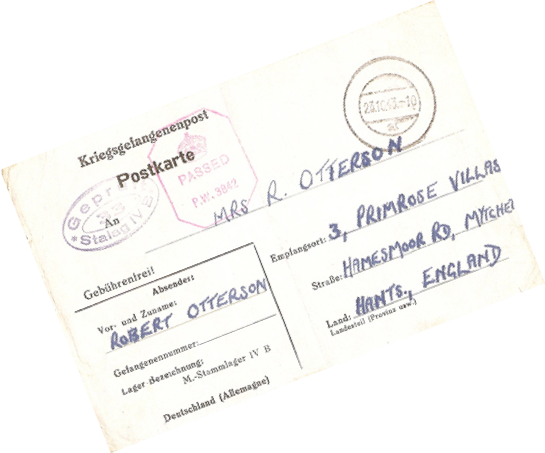 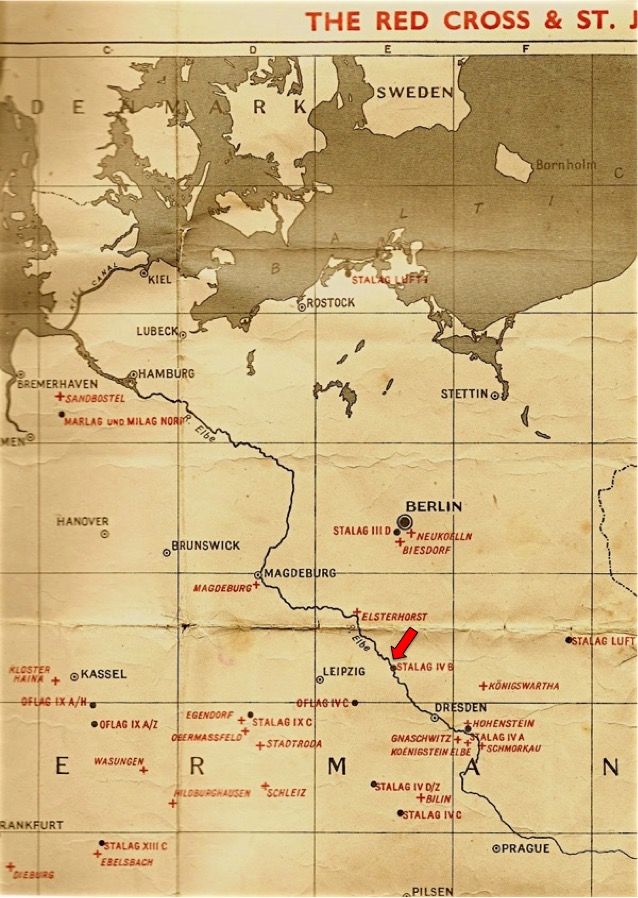 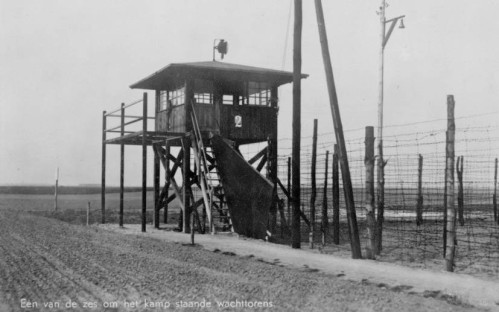 Robert Otterson wrote two short essays about Christmas in his POW log book - one a reminiscence of past Christmases spent in different countries, the other a detailed report of that last Christmas in captivity in Stalag IVB. Both appear below.

“We wish you a merry half a parcel.”  Such was the strange greeting displayed by a lurid poster at the entrance to one of our barrack rooms.

Red Cross parcels had ceased to arrive in camp so that the stock had diminished alarmingly and would necessitate the issue of one parcel between two instead of the usual one, for each man. Food meaning so much to us in this place, and the shortage coming at a time when we hoped for a little extra, it would be quite natural if our spirits were not so festive as they might be.  Experience has taught us that if a man’s stomach is filled, and the threat of hunger in the immediate future is removed, then a good deal of his troubles will vanish.  But even here, the spirit of Christmas was not entirely dependent upon the amount of food available for consumption.  Had there been none whatever, Christmas would have still been celebrated in the secret place of many hearts.

However, things turned out better than we had expected.  Christmas Eve arrived and with it a truck load of American Red Cross Christmas parcels. They each contained a plum pudding, a tin of turkey, nuts, sweets, cheese, biscuits, tea, sugar, milk, corned beef and salmon.  Each parcel was shared by four men.

Christmas morning dawned bright and frosty. We had our 8 a.m. roll call and ran back to barrack rooms which had been swept and garnished the previous evening. The long tables were decorated with coloured strips  of crepe paper, and vases of paper flowers (surely foreign to any botanist).  Streamers, made from salmon tin labels, hung from the ceiling.  A Christmas tree near the central window was the only adornment which could be truly labeled ‘non-ersatz’, it having been collected from the neighboring woods.

The “detaining power” had supplied us with porridge for breakfast as an Xmas gift.  This, followed by fried potatoes, meat roll, jam biscuits and coffee did much to impair my healthy appetite.

After breakfast I attended the service of Holy Communion in our camp church.  Padre McDowall, our Free Church padre, read to us from Dr Moffatt’s translation the beautiful story of the events which preceded, marked and followed the birth of Jesus.  The reading, which occupied 10-15 minutes, was more effective than a sermon. It was listened to in complete silence, unpunctuated by even a cough or a sniff from the 500 or so men present. 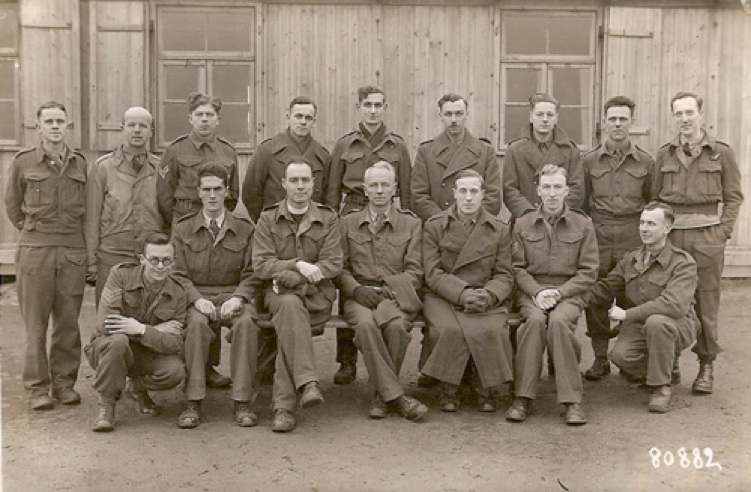 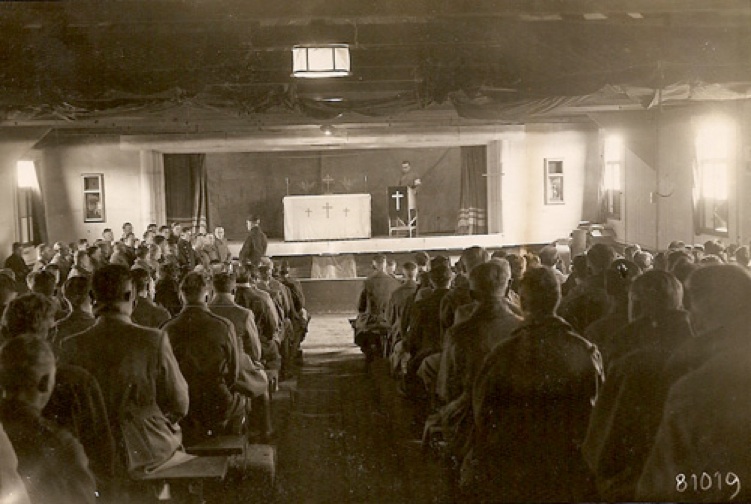 Note:  The best known collection of pictures of Stalag IVB is on the POW website known as the Pegasus Archive. This site provides a variety of internal and external photographs of Stalag IVB, including the delousing shed, the shower block and latrines.

This was followed by a Christmas carol and the Sacrament.  “Traced we the Babe who has retrieved our loss, from the poor manger to the bitter cross”.  Did the inward joy and peace of that hour come from the knowledge of food awaiting us for dinner?  I trow not!  We had fed upon the Bread of Life, which is always available to satisfy the spiritual hunger of every man.

Back in our barrack room at 12.30 p.m., the 23 occupants sat down together for Xmas dinner.  I doubt if there was a man among us whose thoughts did not flash home for a moment. This was my fourth Christmas away from home, some had been away longer and a few, less.  However, we were all grateful to the International Red Cross who had provided our fare. A few perhaps looked beyond this instrument, to the Giver of every good and perfect gift.

I sat opposite my friend Ted Hunt with whom I had shared the  poverty and occasional plenty of 2½ years’ POW life.  “Our people at home,” I said to him, “will never believe that we are sitting down to tinned turkey, roast potatoes and peas, followed by Xmas pudding, bread and butter, biscuits and honey.”  He nodded his agreement through a glass of German beer he was consuming.

The pudding was my own confection. Twenty four hours before it had been a thing of uncertainty, as we had no ingredients. But these materialized in an amazing manner. 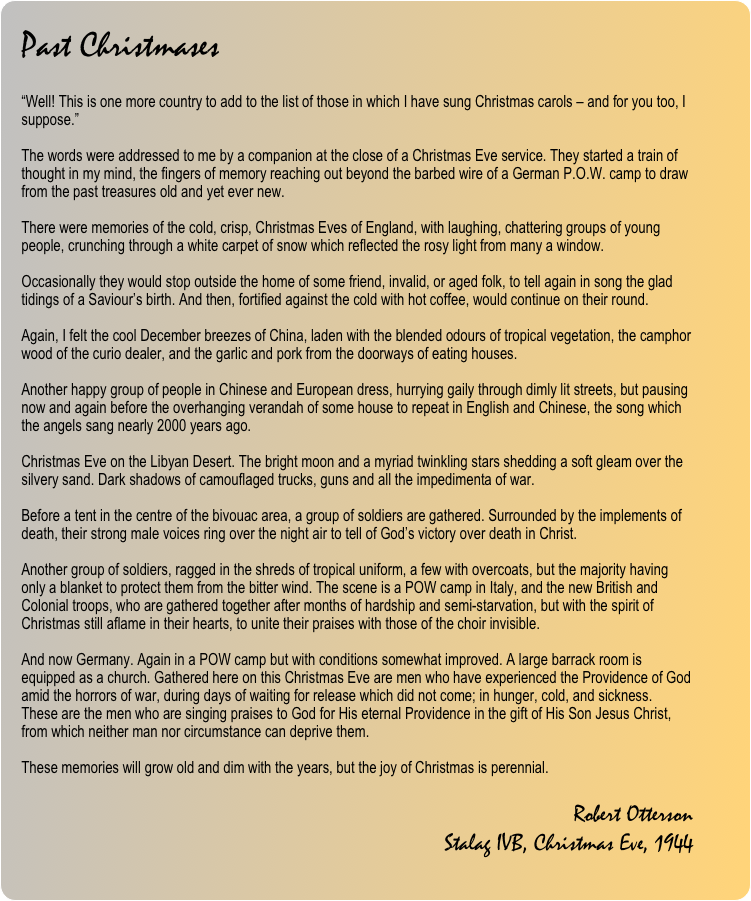 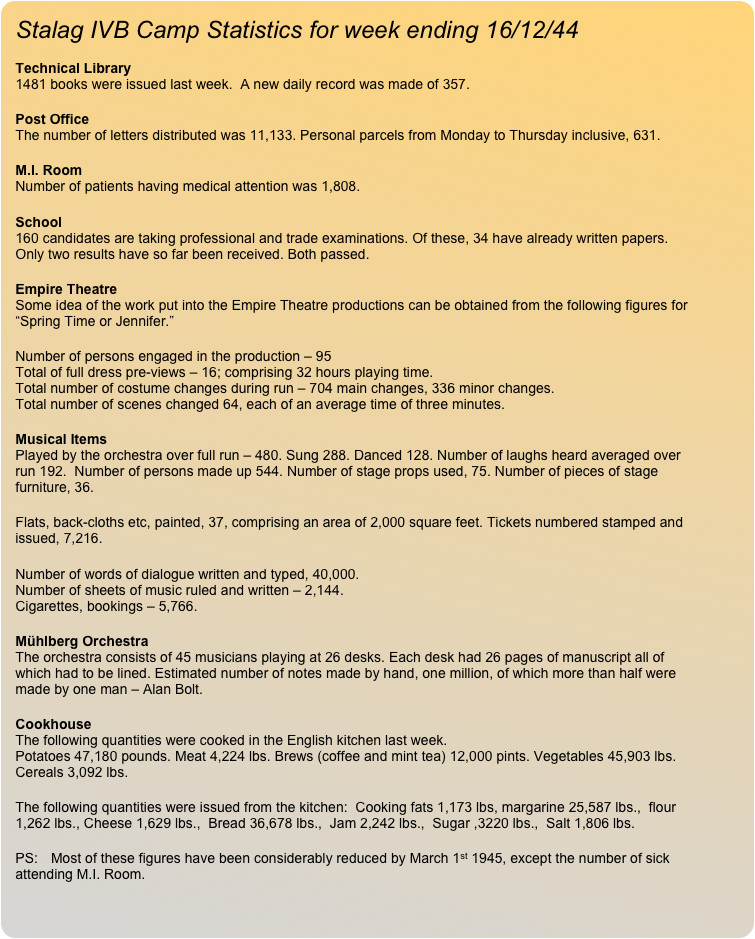 Above:  Some of these "camp statistics" seem like the work of those with too much time on their hands. Yet they provide an insight into one aspect of camp life - the need to find entertainment, sports or reading to keep the incarcerated POWs mentally functional and emotionally stable.

First there was a German flour issue. The next question was what to use as fruit. This was solved by the issue of the American Xmas parcel, from which we received a tin of cherries, two sticky fruit and nut bars, some prunes and mixed nuts.  These, supplemented by two more fruit bars procured in exchange for cigarettes, together with Klim, butter and sugar, all went into the pudding.

The finished product was half the size of my head, and though I say it modestly, it was excellent. Even Ted, never profuse in his praise of my cooking, declared it superb. Our shrunken stomach muscles were stretched to a capacity they had never reached since our capture. Few beds were left unoccupied for the next two hours after the meal.

At tea time there was a splendid assortment of iced and decorated cakes of all shapes and sizes. Many of them would indeed be a credit to a professional pastry cook. I noticed that only small inroads were made upon them, however. The effects of dinner had not yet worn off.

After tea I took part in a religious tableau depicting scenes from biblical history, from the Garden of Eden to the birth of Christ. The pageant was accompanied by soul stirring music of Haydn and Handel, rendered by an orchestra and choir.

And so, as the day had commenced with the story of Christ, so it ended in this tableau, and I went to bed with the peace in my heart that neither man nor circumstance can take from me. 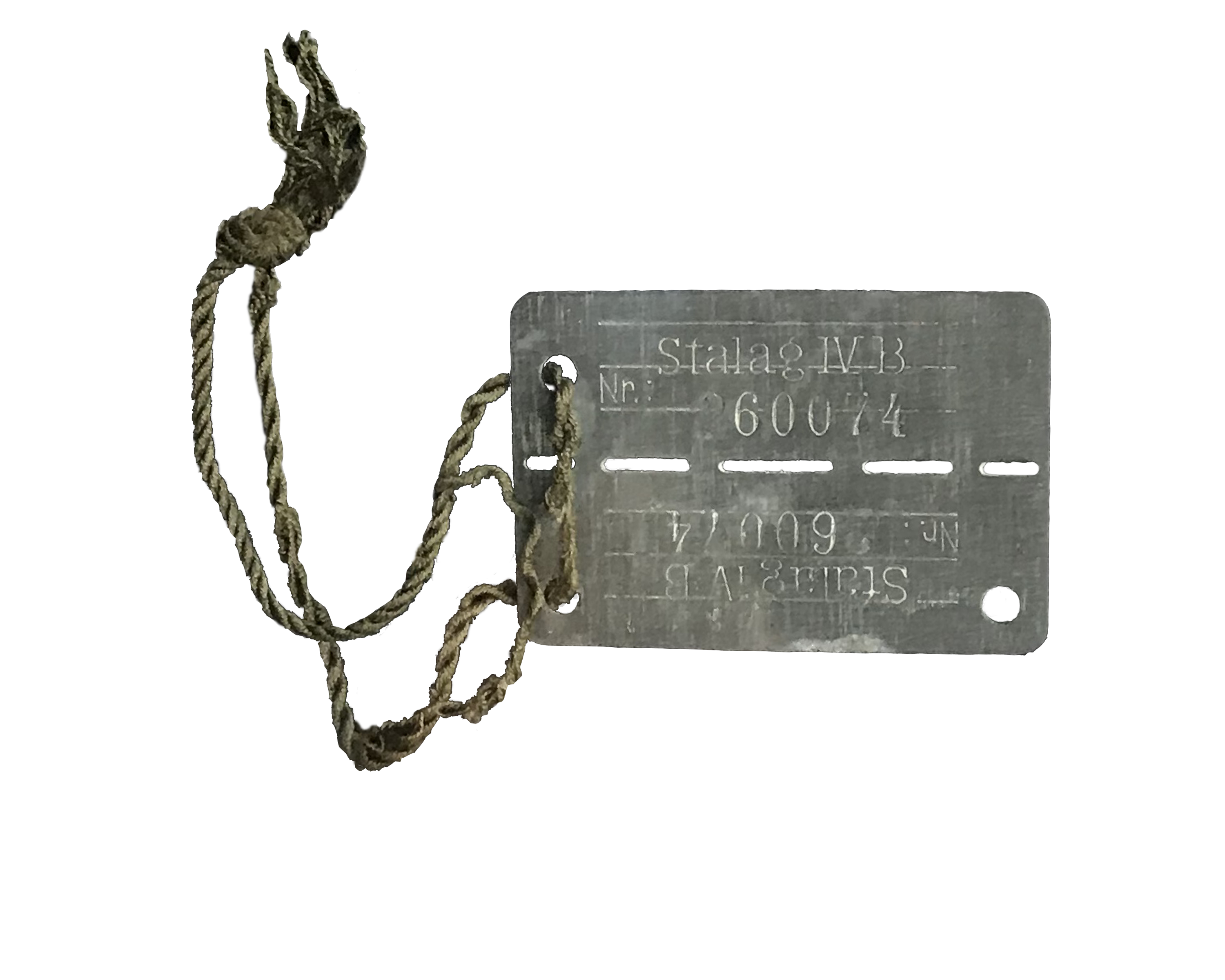 Above right:  Another long list of books to add to those read by Robert Otterson in Italy. Authors' names in red text were missing and have been added.

Right: The hand-crafted tobacco tin or cigarette case given to him by a Russian prisoner of war, probably in this camp. The face of the tin depicts the Kremlin, Moscow, USSR. The name “Lenin” is inscribed in the Cyrillic alphabet on the tomb, lower center, and the date - 1 January 1924 - is the date of Lenin’s death.  Many prisoners were adept at creating works of art with very limited resources. 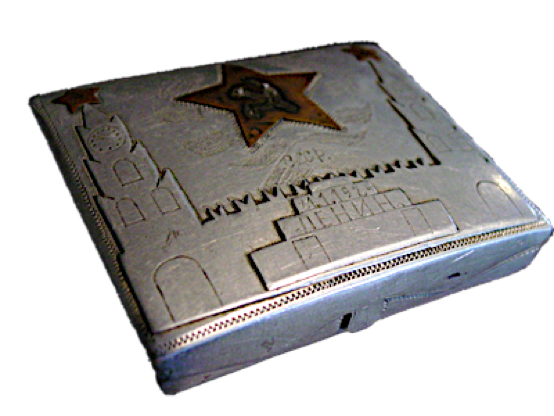