A few miles to the southwest of Birmingham, Britain’s second largest city, the traveler leaves the main road to Bromsgrove to enter the local beauty spot known as the Lickey Hills. It is an area of natural beauty said to have been the inspiration for the Shire in Tolkien’s Hobbit and The Lord of the Rings. And it was in the tiny hamlet of Lickey, at the foot of the hills, that  William Giles was born in 1800. 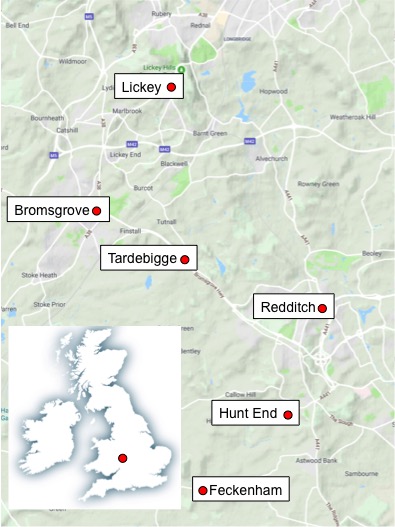 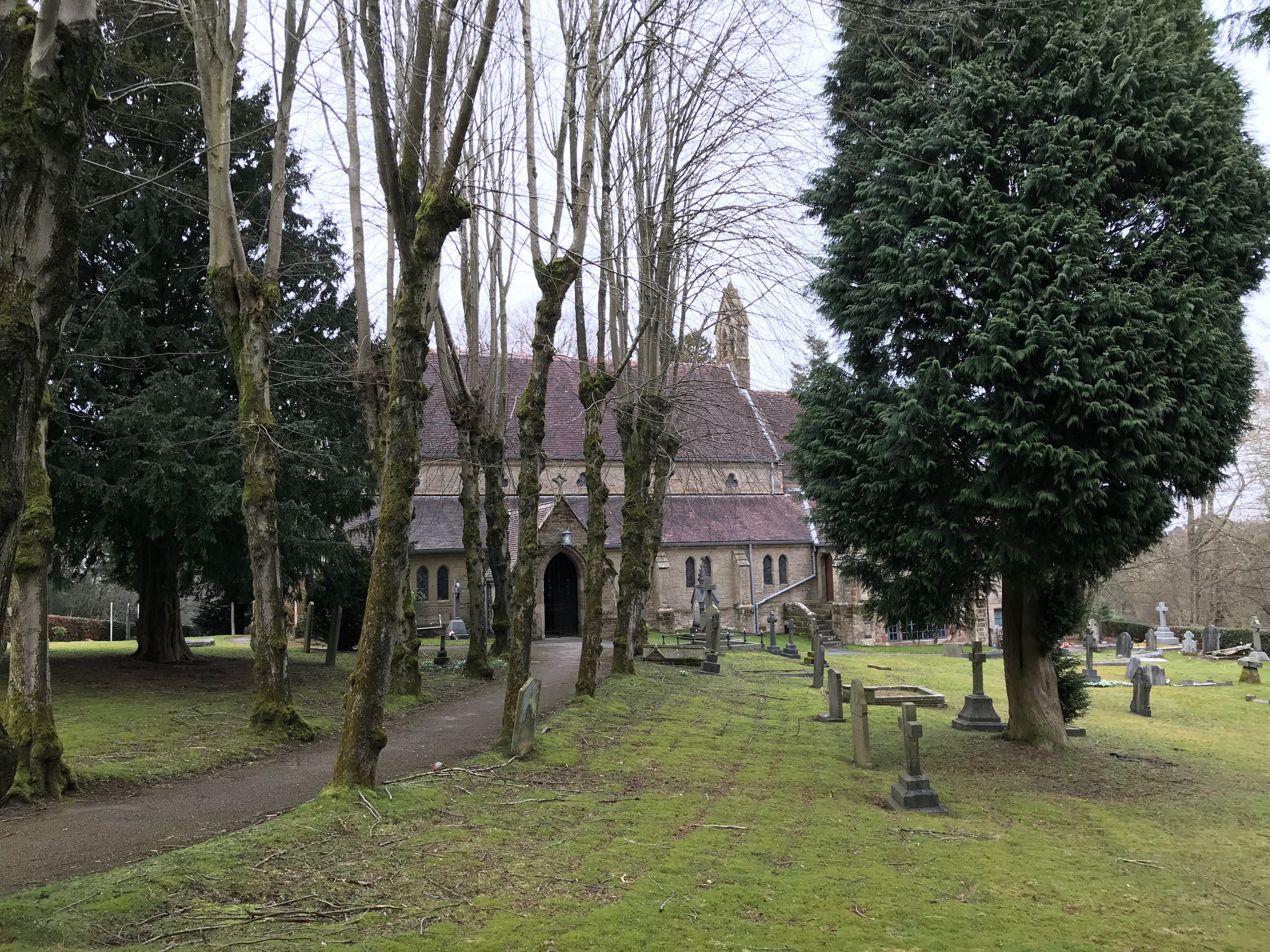 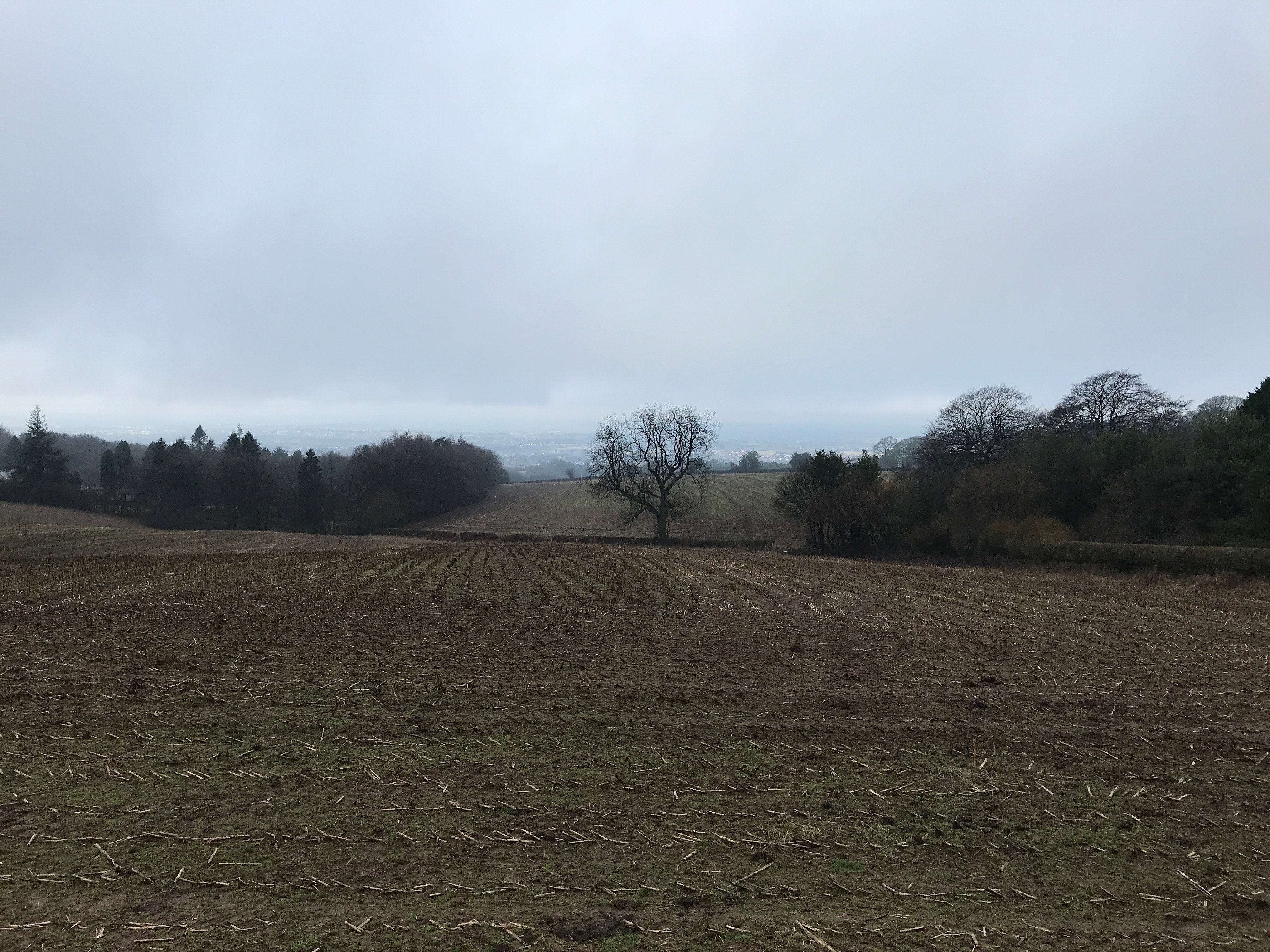 Top: The parish church in the village of Lickey, where William Giles was born.
Above:  View of the Lickey Hills in a rainy mid-March, from Beacon Hill.
Below:  A nailmaker's shop, exactly as it would have appeared when members of the Giles family worked as nailers in the 1800s. Various sizes of nails can be seen in the wooden block, just to the right of the glowing furnace.  This shop, and the nailmaker's cottage, below it, are now at the open-air Avoncroft Museum of Historic Buildings at Bromsgrove.
Bottom:  Inside Holy Trinity Church, Lickey, and its christening font. The church was built to serve the nailer community around Lickey in the late 1800s.

GREAT CHANGES WOULD COME to the city of Birmingham and its satellite towns over the next 100 years, and the Industrial Revolution would create factories and opportunities for work for the growing population across the English Midlands. The greatest changes would come with the dawn of the Victorian era, and it is near the start of this period that the 1841 census gives the first clear glimpse into William and his family. 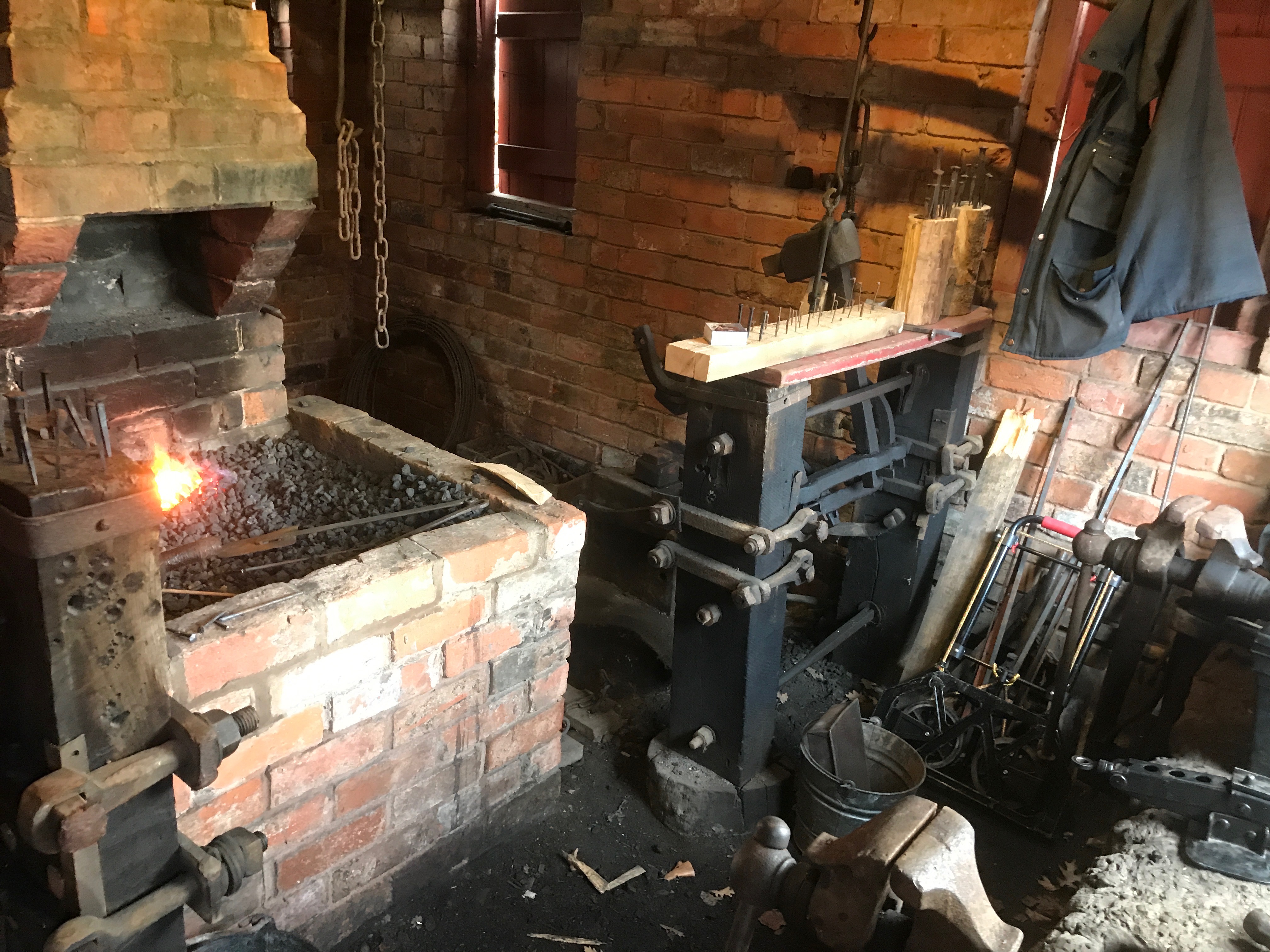 William was the son of Richard Giles and Mary Court, who were married in Bromsgrove in 1798, but little more is presently known about them. William was the first of at least seven children. He married Ann Phillips, around 1820. She was from Hunt End, a small village with a collection of mills making needles and fish hooks, less than ten miles away to the east.  They were married at Feckenham, just over two miles from where Ann lived. However, they raised their family in the parish of Bromsgrove, which was already beginning to take the shape of a typical manufacturing town of the period.

All five of their known children were born there - starting with George in 1821, followed by Ann two years later, and then Henry. There is a nine-year gap before Joseph’s birth in 1836, and then another girl, Harriet, in 1838. It’s likely that additional children were born during the extended gap from 1827 to 1836. Infant mortality was high in the 1800s and it’s highly possible that two or three children died before reaching maturity. If so, their names have not yet been found.

By 1841, the family’s work patterns were familiar ones for this area. William was working as a laborer, but his 15-year-old daughter Ann is a “nailer.” The term is ambiguous, meaning either someone who made nails, or a person who operated or maintained machines in a cloth mill. Both were common occupations for thousands of people in the region. At its height, nail making employed 9,000 people in Bromsgrove alone. More than half of the neighbors in Holy Lane where the Giles family lived had at least one family member working as a “nailer.”

William and Ann’s first son, George, age 20, was not at the home in Holy Lane when the 1841 census was taken. He had also worked as a nail maker in his teens, but before he was 17 he joined the army.  Ten years on, by the 1851 census, the family has moved to the neighboring town of Redditch, close to where Ann was born. Older children Ann and Henry have moved out of the family home (Henry, at least is married), but 15-year-old Joseph is working as a scourer (the term was used both in the local pottery industry and for someone who scoured or cleaned wool) and 12-year-old Harriet is a pin maker. 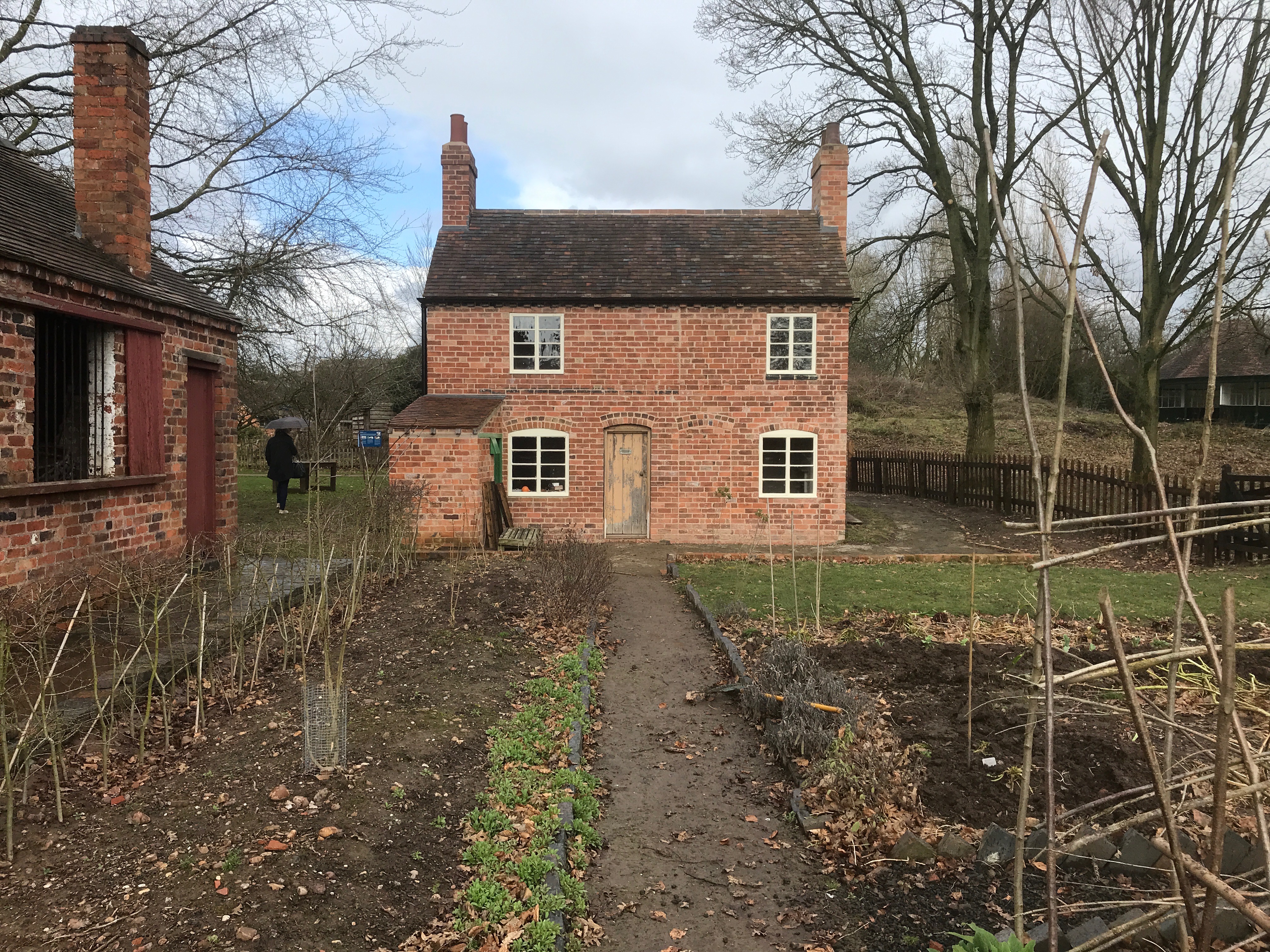 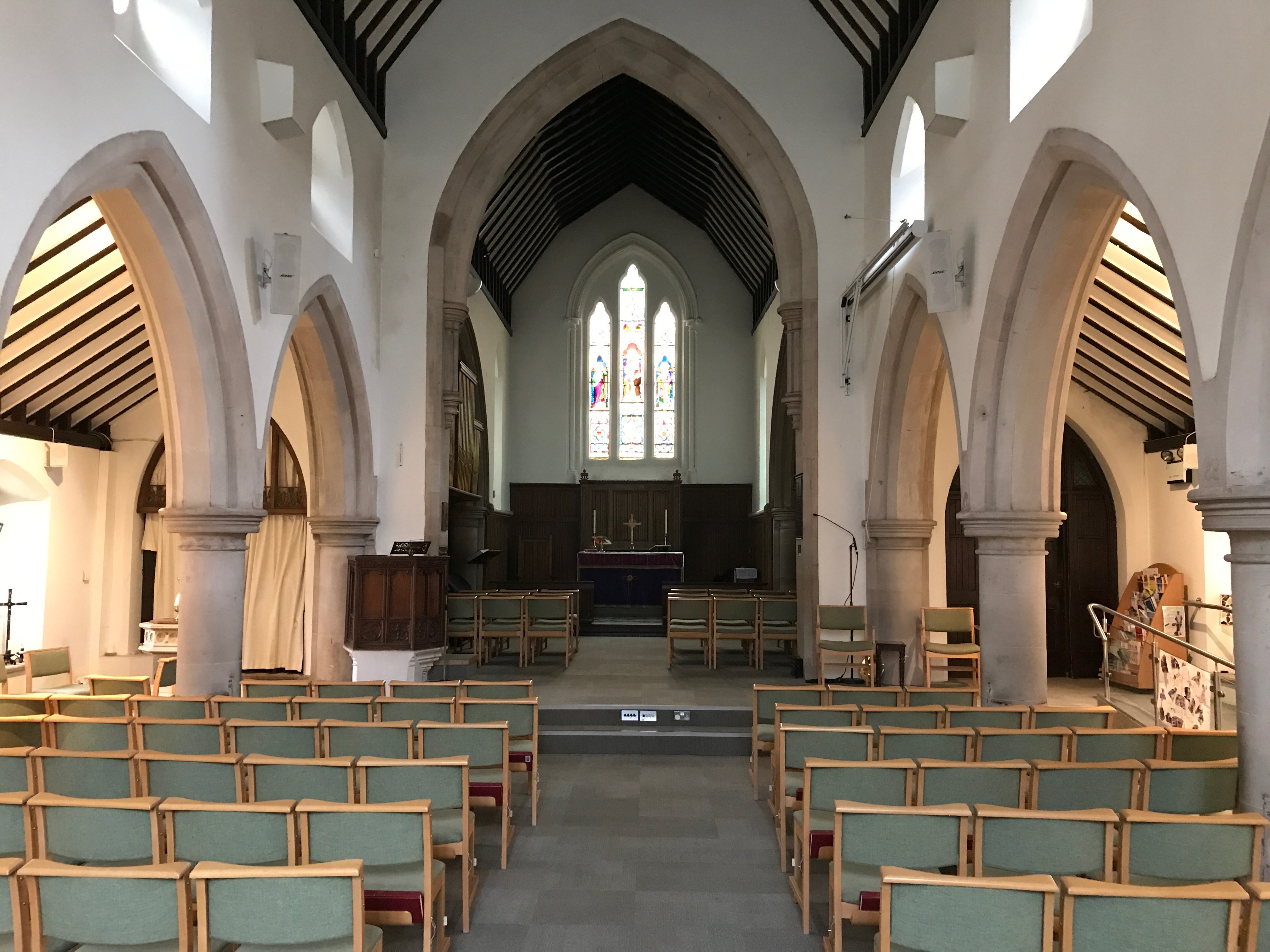 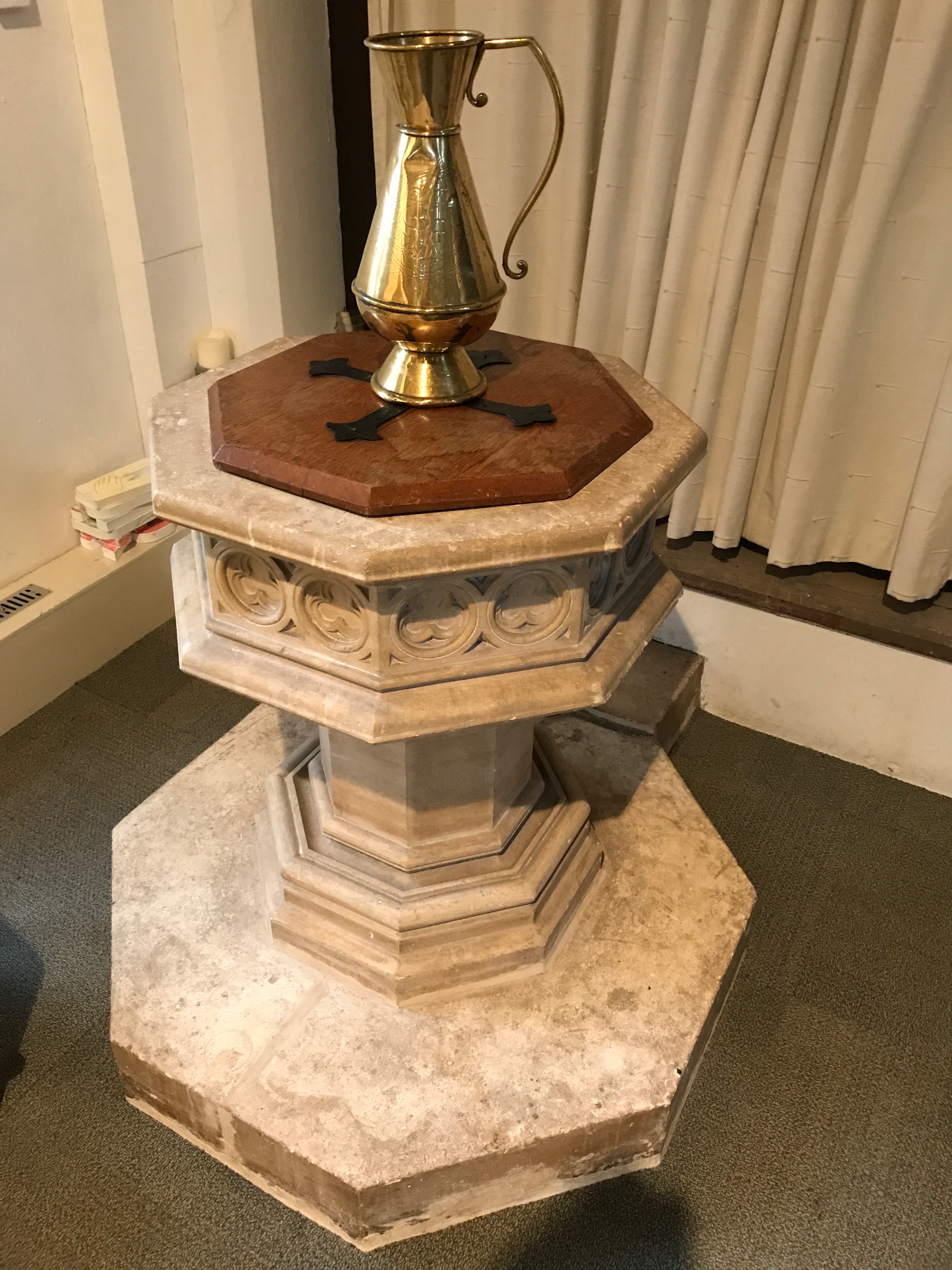 It is the eventful life of son George, however, that we will follow most closely on this website. George would marry three times - twice to widows. Moving in his army career to postings around the world, he would be the progenitor of a large posterity.

As for William and Ann, William lived to a great age and worked all his life as a laborer. As is common with older people, he tended to add a year or two to his age as he grew older and spoke of it, but he was almost 90 when he died.

Ann, sadly, died of a premature death in late 1859, still in her early 50s. William soon remarried, to Mary Hampton, a widow from his village birthplace of Lickey, who remained his companion throughout his long life and survived him by another five years. They lived in Silver Street, Redditch, and she was still adding to the family income as a laundress well into her 70s. When Mary also died in the late spring of 1893, she was not living alone. She had already moved into the home of her widowed daughter by her first marriage, at 45 Walford Street, Redditch, where she shared the company of two grandchildren in her last few years.